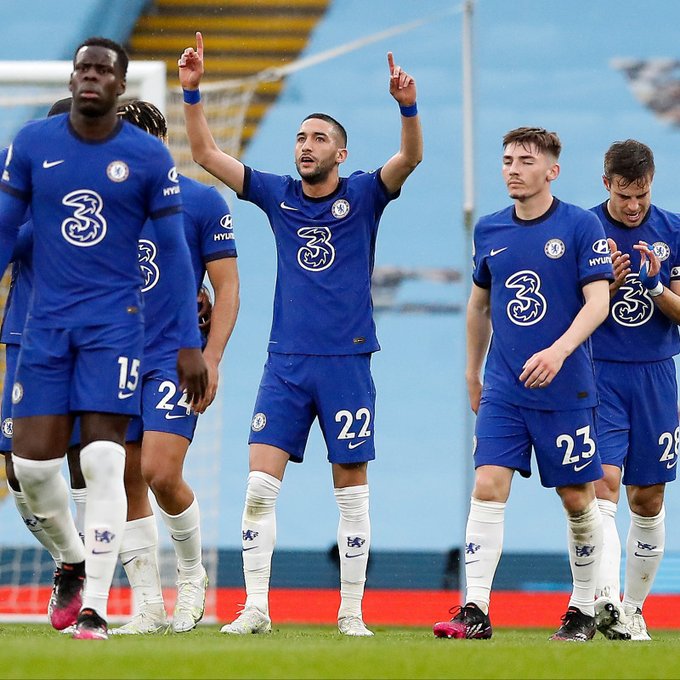 Chelsea postponed Manchester City’s title celebrations by coming from behind to earn a dramatic late victory at the Etihad Stadium.

Following a slow start, a first-half largely devoid of excitement burst into life just before half-time, when the referee waved play on as Andreas Christensen went down injured, allowing Raheem Sterling to put Man City in front.

There was further frustration when Chelsea was denied the chance to bring on a substitute, finishing the half with 10 men, and then the home side was awarded a penalty in added time.

However, Edouard Mendy was wise to Sergio Aguero’s cheeky effort, saving the spot-kick comfortably, and the Blues fought back strongly when restored to a full 11 players in the second half.

First, Hakim Ziyech powered a low shot into the bottom corner from outside the box to level the scores, following good play on the right from Cesar Azpilicueta and Christian Pulisic.

Then, with frustration growing after three Chelsea goals had been disallowed for offside, two by Timo Werner and one for Callum Hudson-Odoi, Marcos Alonso popped up in the box in second-half injury time to turn in Werner’s cut back and give the Blues all three points.