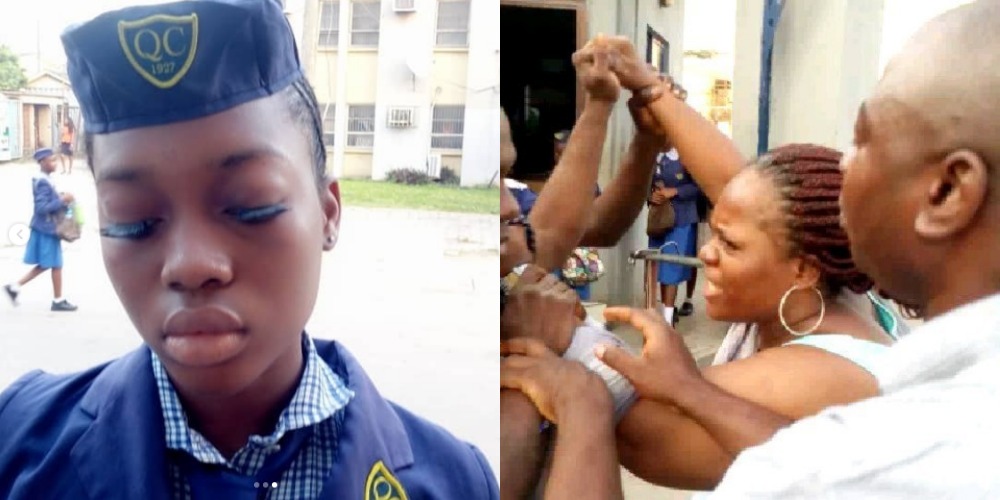 The video captures the moment a mother was seen attacking the security guard of a school (Queen’s College) who refused her daughter into the school because she fixed artificial lashes.

From the video, the mother is seen fighting the security guards of her daughter’s school.

She alleged that she and her daughter were manhandled by the security men which is what enraged her.

Seun Oloketuyi who shared videos from the scene on his Instagram page wrote:

“Queens College student being supported by her mother for indecent dressing.

“You can see her eye lashes, the security men stopped her and the mother resorted to manhandling the security man and others that didn’t support her.”

See video below; Swipe for more

Kindly Share This
Dear Reader, Fetching good and credible news information is tedious and requires huge finance. We are soliciting support from our readers and fans. For as low as N1,000  you can be a part of our golden membership. Your support would go a long way in assisting us to continue guaranteeing quality news to our readers across the globe. Bank transfers can be made to: Zenith Bank 1014932118 Ireporteronline communications Inquiries: Email: [email protected]gmail.com Whatsapp: +234 7032341798 FOR BUSSINESS ADVERT CLICK THE WHATSAPP IMAGE BELOW

Sugar Daddy Tattoos Side Chic’s Name, Mirriam On His … (Video)