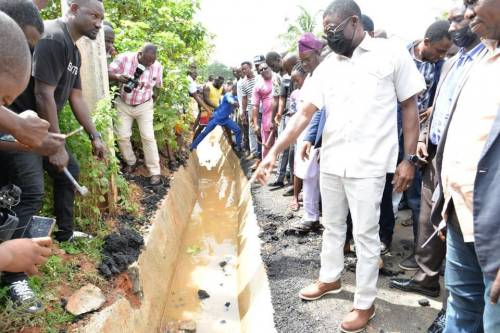 The Edo State Government has criticised the handling of the Lawani Crescent road project in the Akoko-Edo Local Government Area of the state.

This followed a viral video which exposed the shoddy execution of the road project in the state.

Philip Shaibu, the state deputy governor who inspected the project and described it as substandard, said the project falls short of the standard expected of road projects in the state.

The deputy governor, while commending the person who raised the alarm in the viral video, said the contractor should be brought to justice.

“We thank the whistle-blower for raising the alarm over this bad job and call citizens to take charge of all government properties in their area. The contractor handling the Lawani Crescent project must be arrested for the bad job done and handed over to ICPC (Independent Corrupt Practices and Other Related Offences Commission) and the EFCC (Economic and Financial Crimes Commission), to enable us to ascertain exactly what happened.

“The project stands revoked and the state government is taking over the reconstruction of the road immediately. N360m is what is allocated to Akoko-Edo constituency projects by the National Assembly this year. We would investigate all that to ensure we have value for money,” he said.