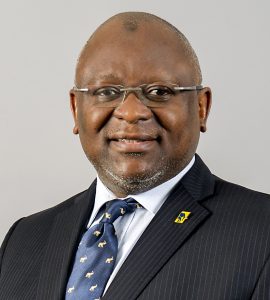 FIRST Bank of Nigeria (FBN)  customers were caught in panic withdrawals in Abuja, following the Central Bank of Nigeria (CBN)’s board shake-up and damning verdict on the bank’s poor corporate governance.

The FBN, one of Nigeria’s tier-one banks, surprised both depositors and admirers when the Central Bank issued the board of the bank with a query for the removal of its CEO Adesola Adeduntan, citing non-approval of the change of the CEO. The CBN  stressed that the bank was not beyond regulatory supervision.

The situation was curious because Adeduntan had eight months to the end of his tenure.

The apex bank noted that the action of the board of the FBN sent a negative signal to the market on the leadership of the board and management, stressing that it queried the board because of negative developments.

For instance, the Central Bank of Nigeria raised concerns that FBN had not complied with regulatory directives on divesting its interest in Honeywell Flour Mills despite several reminders.

The CBN’s Director of Banking Supervision Haruna B Mustafa said after four years, the commercial bank was “yet to perfect its line on the shares of Mr Oba Otudeko in FBN Holdco which collateralised the restructured credit facilities for Honeywell Flour Mills contrary to the conditions precedent for the restructuring of the company’s credit facility.”

The CBN stated that for failure to perfect the pledge and satisfy the condition for regulatory approval, such restructuring had been terminated and the credit facilities now payable immediately.

In the eyes of financial experts,  the insider dealing did not go down with the CBN and could reflect that things were not going down well with the bank.

Nigeria has witnessed several banking collapses in the past. For instance, in 2009, the Nigerian economy faltered and the banking system experienced a crisis.

The stock market collapsed by 70 per cent in 2008-2009 and many Nigerian banks had to be rescued. This followed a consolidation exercise by the apex bank, which led to the merger of some banks to save customers from loss of deposits.

The same fears overwhelmed depositors with the First Bank Nigeria, as some of them engaged in panic withdrawal last week and early this week, findings by The ICIR have shown.

A depositor with the First Bank Nigeria who pleaded anonymity confirmed to The ICIR that she withdrew her N900,000 savings from the bank, citing concerns of recent development of the regulatory intervention on the bank.

“I have been in this country long enough to read the writing on the wall. With the Central Bank’s intervention in the leadership of the bank, I have a serious concern that there could be a corporate misdemeanour from the managers of the bank. I have the utmost respect for the bank with its longstanding legacy, however, I have to be cautious at this time.” the depositor noted.

Usman Mohammed, also a depositor at FBN, raised concern that the banking network had been poor since last Thursday, as he laid a complaint that he had to wait in the bank for five hours before exercising his banking rights. He noted that the banking services were still having some issues, stressing that the development might not be unconnected to the central bank’s intervention in the management of the bank as a regulator.

In Nigeria, failed banks are handed over to the Nigeria Deposit Insurance Corporation and depositors were initially paid N50,000 -although it was later increased to N200,000.

Most notably, poor corporate management and weak enforcement of banking supervision have resulted in a bank collapse. Bank collapses in Nigeria have pushed millions of people into poverty. It is on record that thousands of people who have kept their life savings in the banks have lost them, including children’s school fees, savings for retirement, and medical bills, among others.

On Thursday, Godwin Emefiele, the governor of the CBN announced the reinstatement of Adeduntan, after sacking all directors of the FBN Holding PLC.

The apex bank explained that it considered itself a key stakeholder in management changes involving FBN due to the forbearance and close monitoring by the bank over the last five years aimed at stemming the slide in the going concerns status of the bank.

“The action by the board of the FBN sends a negative signal to the market on the stability of leadership on the board and management and it is in the light of foregoing that the CBN queried the board of directors on the unfortunate development in the bank,” the apex bank said in a statement.

Analysts have said that the present corporate governance concerns raised by the apex bank were the same issues that resulted in the banking distress witnessed in 2009 by the nation.

Some of the factors that resulted in banking collapse included: macro economic instability caused by large and sudden capital inflows, major failures of corporate governance at banks, lack of investor and consumer sophistication, inadequate disclosure and transparency.

Basil Okafor, a depositor with the First Bank,  told The ICIR that he had been watching the turn of events recently in the country and had withdrawn a large chunk of his money from the bank as a precautionary measure in protecting his hard-earned savings.

“I was at the bank early as early as 8 am on Friday morning. I am a businessman and have been watching things closely.  I lived in Spain for years and had come back home to invest,” he said.

“However, with the turn of events unravelling in the country, I’m really sceptical about what is happening. Even the governance structure baffles me. which was why I had to quickly take that step. There is a lot of apprehensions even from my interaction with some depositors while we were in the bank. With this development in the bank and the recent turn of events in the country, I had to take this precautionary step on behalf of my family.”

Another depositor who spoke to The ICIR said concerns of poor corporate governance concerns raised by the CBN  had forced him to tread with caution regarding his relationship with the bank.

“I can keep my account at First Bank, but I will not lodge a huge amount in the bank. The CBN’s report shows the bank has poor corporate governance. The CBN is also not completely neutral,” the bank customer, who is a journalist and financial expert, noted.

A financial analyst Tope Fasua told The ICIR that the First Bank still had all the status of a big bank in place, stressing that he could still bank with FBN unless things escalated negatively in the coming days.

“If the First Bank should go down, it will be very cataclysmic to the industry. What this also shows is that there is no big bank that cannot have issues. The bigger the bank, the bigger the headache. It used to be the biggest bank, but later lost the status to other banks.”

Michael Ani, finance expert, while reacting to the concerns raised, told The ICIR that he would still confidently bank with FBN despite the concerns of the apex bank, since they had taken measures to ensure proper management of the bank.

“Yes I will, because it doesn’t affect depositors’ funds. I mean a bank like FB, the CBN will never allow such to happen. We saw it in the case of Skye Bank that is not even as strong as First Bank,” he noted.

WTO DG Okonjo-Iweala Appoints 4 Deputies From US, China, Others