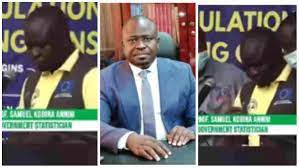 This occurred while he was addressing the public on the ongoing Population and Housing Census exercise which commenced on 13th June 2021.

In the video shared online, Professor Annim went speechless and later began to stammer on stage while speaking to the audience. He was swiftly attended to by some people at the event and was later rushed to the hospital.

Professor Samuel Kobina Annim was appointed as Government Statistician somewhere in 2019. He assumed duty on March 1, 2019.

Watch the video below………

See Photos Of Three-Headed Baby Hailed As Incarnation Of God