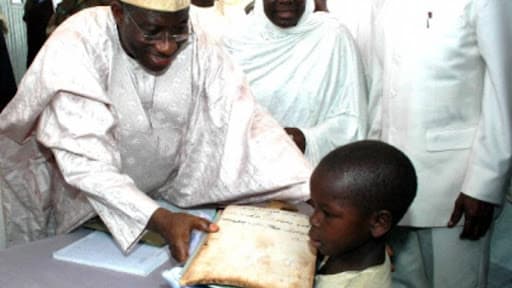 Former President Goodluck Jonathan has said some governors were not happy when built Almajiri schools.

The government of Jonathan reportedly built 35 Almajiri schools within his first two years in office.

While delivering Graduation lecture for the participants of Executive Intelligence Management Course (EIMC) 14, 2021 at National Institute for Security Studies (NISS), Abuja, on Thursday, Jonathan described Almajirai as a time bomb.

He asked governors of the 19 Northern States to modify the system of Almajiri education in a bid to solve a wide range of security challenges facing the country.

Jonathan also asked other governors to work hard because it is not the responsibility of the Federal Government to build and manage schools.

“One thing again, is the issue of unemployment. In Africa, why do we have so many unemployed youths? We do say that the idle hand in the devil’s workshop. There is always a tendency for these idle hands to be used for anti-social activities.”

“One of the ways of tackling unemployment is the issue of education. Just like Nelson Mandela would say that, when you educate people, you give them the power and the weapons to know what’s happening in their environments.

According to him, the nation that doesn’t spend money in developing the youths, giving them functional education, that nation will spend a lot of money in managing the issues of insecurity.

He said, “A number of approaches need to be used in managing all these. The State governors must work very hard. It is not the federal government that is supposed to be building and managing primary and secondary schools.

“When I was in office, I had to step in at a time, to even attempt to build Almajiri schools. I know that some of the governors probably were not happy but then, they didn’t tell me they were not happy, it was when I left office they said they weren’t happy.

“We used the federal government’s money from Universal Basic Education. It was just to partner with the State governments to create these learning environments, and I did that because of my knowledge about the ethno-religious crisis.

“My administration recruited these young guys who had no homes because of the traditional and Almajiri education that is common in the North, they only train them on Islamic education, and at the end of the day, even their local governments didn’t employ them.

“These are the people that make it look like we are sitting on the keg of gun-powder. That is why we started the Almajiri programme.

“I believe that that programme is good but it should be modified based on the circumstances of every State. The governors should not just throw it out, they should look at it, modify it and run it in a way that we would not have these numbers of out-of-school children.”

Tears As Another Prominent Nigerian Dies