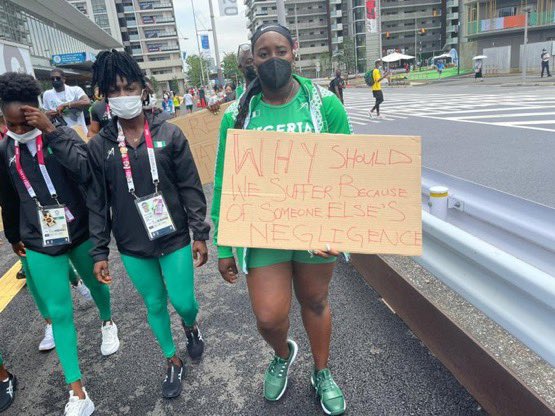 The disqualified Nigerian athletes at Tokyo Olympics, on Friday, July 30, 2021, protested over the action of the Athletics Integrity Unit (AIU) against them, as they accused the Athletics Federation of Nigeria (AFN) of negligence.

It would be recalled that 10 Nigerian athletes were disqualified from participating in the ongoing Tokyo 2020 Olympics.

The athletes were disqualified for not meeting the minimum testing requirements under Rule 15 governing National Anti-Doping Federation.

Following their disqualification, the affected athletes took to the streets of Tokyo to express their frustration at seeing their dreams of competing at the Olympics dashed by negligence from the Ministry of Sports and the AFN.

They staged a protest in Tokyo with banners calling out the Ministry of Sports and AFN for negligence that led to their disqualification.

“Why should we suffer because of someone else’s negligence,” a banner held by one of the athletes read.

“All we wanted to do is to compete,” another banner read.

Abba Kyari Is A Crime-buster, Jealous FBI Out To Tarnish His Image – Fani-Kayode