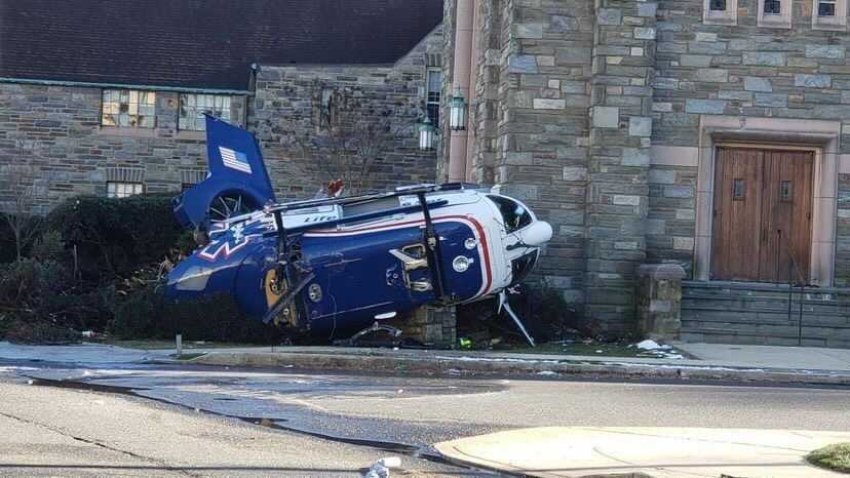 JUST IN: Helicopter Crashes Near A Church (Photos)

A baby was among four people involved in a horror chopper crash after a medical helicopter came down near a church in Pennsylvania.

The chopper crashed in front of the Drexel Hill United Methodist Church in Delaware County on Tuesday afternoon.

According to CBS, the medical chopper was heading to Children’s Hospital of Philadelphia from Maryland when it crashed near the church.

Four people, including an infant, were on board the medical chopper when it went down.

Officials called the crash a “miracle” landing because the area in which the helicopter crashed is heavily trafficked and no one outside the chopper was injured.

All the victims on board, including the pilot, survived the crash, suffering non-life-threatening injuries.

Photos from the scene showed the medical chopper lying sideways on the side of the church.

The tail of the medevac could be seen torn off and folded underneath the cockpit.

The director of Emergency Services for Delaware County said Tuesday he is “feeling grateful” after four people survived the crash.

“A helicopter down is never something we want to deal with,” Timothy Boyce told the outlet.

“When they pull up and see that it’s a medical flight and then they tell you that there’s a pediatric patient on there, and things are going the right direction right now, I think we have to be grateful.”

The Drexel Hill United Methodist Church did not appear to have suffered any structural damage.

The Federal Aviation Administration said it and the National Transportation Safety Board would investigate the crash.