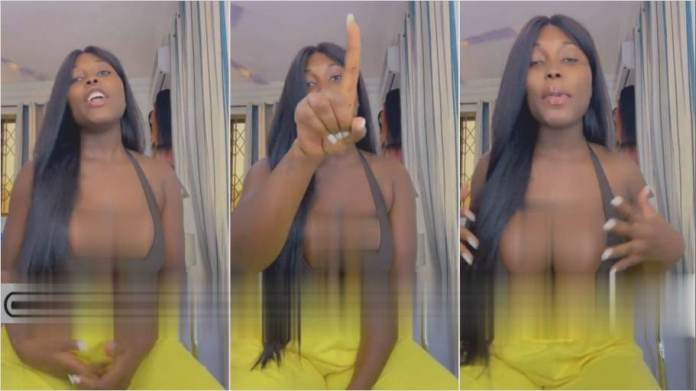 Ghanaian snapchat ŋʋdist Abena Marie, has got many massively reacting on social media as she decided to organize a virtual party.

She has announced GH¢100 as the charge for the Snapchat party which she will organize in December.

According to her, the two-day party will be with her female friends and will be held online.

Read Also Couple Caught Having $ex On A Busy Road, See What Happened Next (Photos)

Abena mentioned that the party is her way of saying ‘thank you’ to her fans for always supporting her.

In a video, Abena Marie urged netizens to pay and join in the virtual celebration as she promises to serve their prying eyes the best of entertainment.

Sharing the video Abena Marie wrote: “I’m officially inviting you to come join my girls & I, let’s party virtually ❤️🥱🔞 If you insult me your papa. 🥵😂😩 Snapchat: abyynamarie”

Despite the cold reception after she announced the virtual party, it has emerged that many netizens, especially men are paying the amount in order to have access to watch her.

Hilarious!! ‘Wife Material’ Girlfriend Burns Yam She Was Cooking For Her Lover (Video)