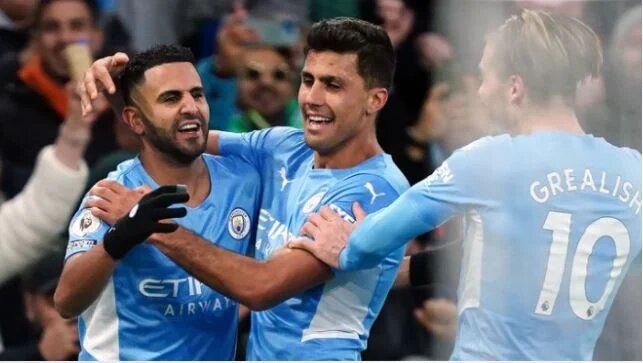 Pep Guardiola’s men know that a win at the Etihad will guarantee a fourth league title in five years.

Stones has been absent since limping off in the first leg of City’s Champions League semi-final against Real Madrid, while Walker’s departure helped turn the tie in the Spanish side’s favour late on in the second leg.

Both were badly missed as West Ham took a 2-0 lead against City last weekend before the defending champions recovered to draw 2-2.

Guardiola has also been without centre-back Ruben Dias recently, forcing him to field 37-year-old Fernandinho out of position in the heart of the defence.

“We have incredible doctors and physios and they have made incredible recoveries,” Guardiola said at his pre-match press conference on Friday. “It is good to have them back.”

City lead Liverpool by a point at the top of the table after another titanic title race between the two teams.

But while the Reds remain in contention for an unprecedented quadruple of trophies, City need the title to prevent just the second trophyless campaign of Guardiola’s 13-season career as a coach.

“Do what you’ve done in the last month, home and away, and go for it. At the end it’s just a football game. We are not going to do anything new.”

City have been dominant domestically in the Guardiola era but have failed to win the Champions League.

Guardiola, though, reiterated his belief that winning a league title over 38 games is a greater achievement that conquering Europe.

“I would say because it’s more difficult,” he said. “More difficulties with a lot of weeks, a lot of games. Struggles with injuries with good moments, bad moments with different situations with a tough opponent (Liverpool).”