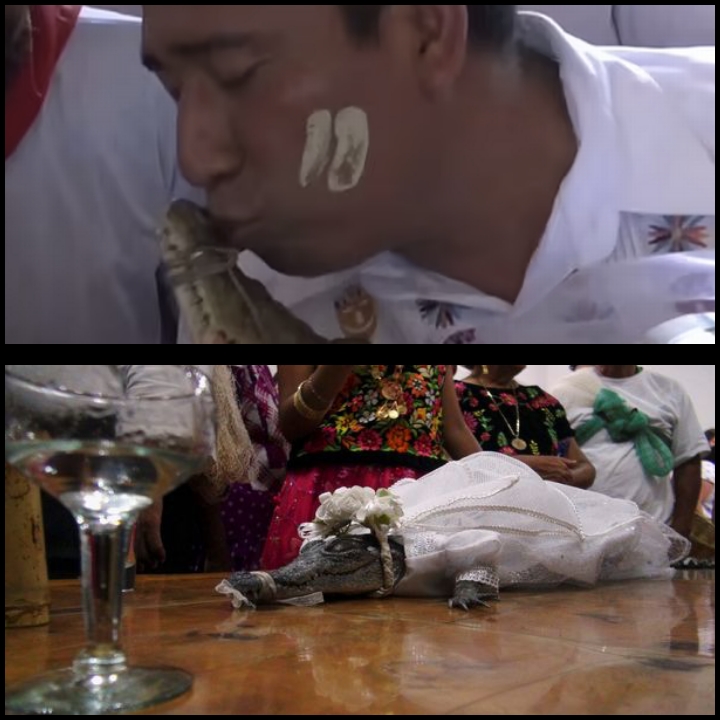 A Mexican mayor has married an alligator wearing a wedding dress, sealing the odd couple’s union with a kiss.

It was part of an age-old indigenous tradition, conducted by Mayor Victor Hugo Sosa, and intended to bring abundance to the village of San Pedro Huamelula in southwestern Mexico.

The seven-year-old reptile is known as the Little Princess, and is thought to be a deity representing Mother Earth; her marriage to the local leader symbolises the joining of humans with the divine.

The ceremony was colourful, with traditional music and revellers dancing, while urging the indigenous leader to kiss his new bride.

Trumpets blared and drums provided a festive beat as the mayor carried the alligator bride in his arms through the streets as men fanned it with their hats.

Elia Edith Aguilar, known as the godmother who organised the wedding, said: “It gives me so much happiness and makes me proud of my roots.

She added that it was a privilege to be trusted with carrying out the ceremony, and had deliberated long and hard over what to wear.

The small alligator’s snout was tied shut to avoid unwanted biting as the mayor kissed it multiple times throughout the ceremony.

It’s thought that the ritual marriage dates back centuries, to pre-Hispanic times, among Oaxaca state’s Chontal and Huave indigenous communities.

It is similar to a prayer pleading for nature’s bounty in the village.

Mayor Sosa said: ‘We ask nature for enough rain, for enough food, that we have fish in the river.”

The age-old ritual in San Pedro Huamelula, now mixed with Catholic spirituality, involves dressing the alligator or caiman in a white wedding dress plus other colourful garments.