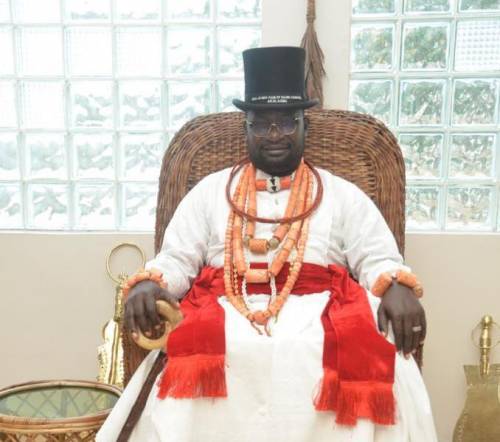 The Ologbotsere (Prime Minister) of Warri Kingdom, Chief Ayirimi Emami, has invalidated a report that President Muhammdu Buhari sent a condolence message to the Itsekiri nation over the death of their monarch.

He spoke in reaction to reports credited to the Special Adviser to the President on Media and Publicity, Femi Adesina, titled: “President Buhari Greets Itsekiri Nation On Olu-designate, Mourns Departed Monarch” on Tuesday.

Emami, in a statement on Wednesday, declared that it was foolery for anyone to drop the name of Buhari in the ongoing controversy surrounding the Olu throne.

He warned that anyone who wants to use the president’s name to draw ethnic and political colouration to issues surrounding the throne should be wary of the dangers of such actions.

Emami said he neither conveyed a General Assembly of the Itsekiri nation at Ode-Itsekiri, the ancestral home of the Itsekiri people, to announce the purported demise of Olu, His Royal Majesty Ogiame Ikenwoli nor conveyed a meeting to name his successor as stipulated by the 1979 Edicts governing the Olu throne.

He declared that the Itsekiri nation would not allow meddlesome interlopers to change their tradition overnight or railroad them into going against the gods and ancestors of the land in desperation to control the throne.

He told Buhari that processes and procedure for the enthronement of a successor to the throne were still ongoing, declaring that anyone parading Prince Utieyinoritsetsola Emiko, son of Ogiame Atuwatse II as Olu-designate, have no clue about the customary laws, norm and tradition of the Iwereland.

The statement read: “My attention has just been drawn to a publication credited to Femi Adesina, Special Adviser to the President, (Media and Publicity) entitled ‘President Buhari Greets Itsekiri Nation On Olu-Designate, Mourns Departed Monarch’ on Tuesday.

“Mr President that I know will not delve into the customary issue of any ethnic group more so when there appears to be unsettled customary discrepancies and contentions. President Muhammadu Buhari that I know does not involve in illegality. It has not come to when he will formally join the rest of the world to mourn and congratulate us.

“Anyone who wants to use President Buhari’s name to draw ethnic and political colouration to the Olu throne issue should be wary of the danger of such actions. We are Itsekiri people and not any other tribe. We will not allow outsiders to come and dictate for us. We have our customs and traditions and the Nigerian constitution evolves from the peoples’ norm, values and tradition.