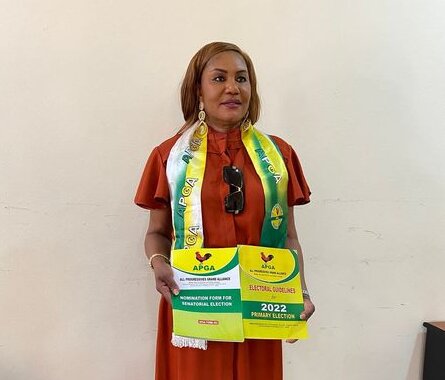 Mrs. Ebelechukwu Obiano is back in the news, but this time it’s not because of being slapped or slapping anyone.

The former First Lady of Anambra State made news last month when she was involved in a scuffle with Bianca Ojukwu, widow of Biafra warlord, on her husband’s first day out of office.

During the tail end of his tenure, Chief Willie Obiano announced that his wife would join the senatorial race.

On Tuesday, the woman obtained the All Progressives Grand Alliance (APGA) Expression of Interest and Nomination forms to contest the 2023 Anambra North Senatorial District election.

But while some supporters and party members were with her, the former governor was not seen, at least in the pictures released to the public.