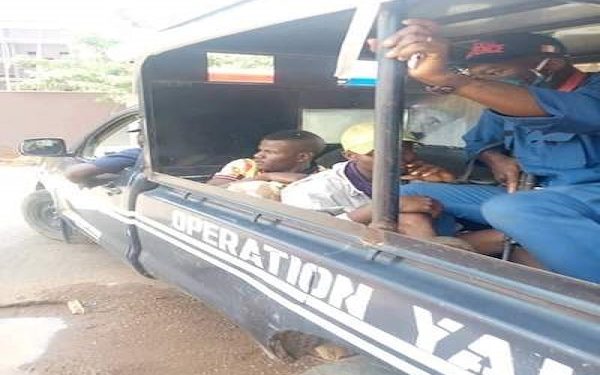 Thugs numbering about 100 again attempted to attack the protesting labour unionists, as they tried to invade the secretariat of the Nigeria Labour Congress (NLC) when the workers were gathering for the third-day protest on Wednesday.

The thugs carrying dangerous weapons were said to have stormed the NLC secretariat around 7:00 am.

Earlier, rumor had it that Kaduna residents were warned to tread with caution as trucks loaded with thugs were seen on their way heading into Kaduna metropolis from Kawo axis.

When contacted to confirm whether there were casualties, the Kaduna state police Command PPRO, ASP Muhammad Jalige said, there was an attempt by some hoodlums to launch attack on peaceful protesters, but police officers guarding the premises repelled the thugs and made some arrest.

According to him, “we have been able to arrest some of them and investigation is ongoing to that effect.”

In a related development, an anti-labour protest was staged within Kaduna metropolis, countering the NLC allegations against the state government.

The protest which held at NEPA Roundabout; the same spot where NLC members gathered for protest on Wednesday, consist of women, youth and children, who carried placards with inscriptions against the ongoing NLC strike.

The protesters accused the labour union of putting Kaduna residents in a total blackout.

If UK Had Just One Of The Problems Nigeria Is Facing, We Would Be Struggling — British High Commissioner

Nigerians Who Disrupt 2023 Elections Will Be Denied Visa – UK