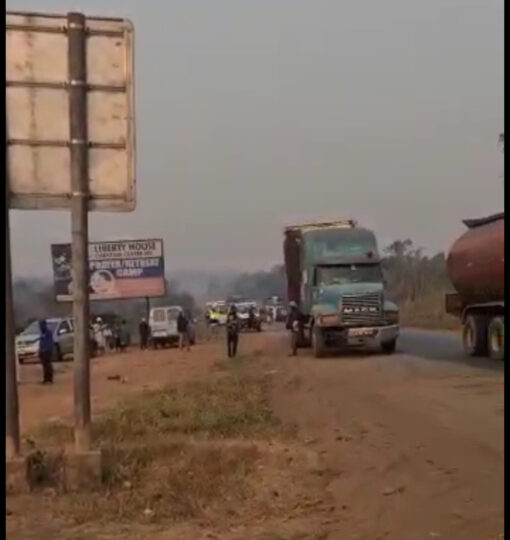 Kidnappers who laid siege on Benin-Ekpoma highway for two days met their nemesis Wednesday as three of them were killed by security men in a shootout.

The combined security force, comprising police, army and vigilante men arrived on time as many motorists were stranded on the road.

The kidnappers had taken over the ever busy highway Tuesday morning, but were pursued into the forest by security operatives.

For more News Join Our WhatsApp group with this link below

It was gathered that an unidentified young man who was driving a Lexus SUV was hit by stray bullet on his shoulder.

The undeterred gunmen appeared on the highway Wednesday morning, laying ambush for travellers plying the road.

In a video shared by a lawyer heading to Ekpoma high court, staccato of gunshots could be heard as vehicles formed a long chain on the road.

The travellers the road were held for several hours while the security operatives engaged the hoodlums.

Combined security operatives again came to the rescue of the motorists, as they engaged the hoodlums.

The hoodlums however succumbed to the superior power of the security men who neutralized three of them, while others escaped into the forest with gunshot injuries.

The State Police Command Spokesman, SP Kontongs Bello, has confirmed the incident to our Correspondent in a phone interview.

“It’s true sir, it happened yesterday [Tuesday] at 0620hrs, Okwo in Ehor area, but the combined team of the police and the military foiled the attempt, nobody was kidnapped. One person, a young man driving Lexus 350 was hit in his car in his shoulder.

“Meanwhile today (Wednesday), the hoodlums come out again and three of them were gunned down by the combined team of the police, military and vigilantes. Edo must be safe,” Bello said.

JUST IN: Emirates Airlines To Resume Nigerian Flights (See When)