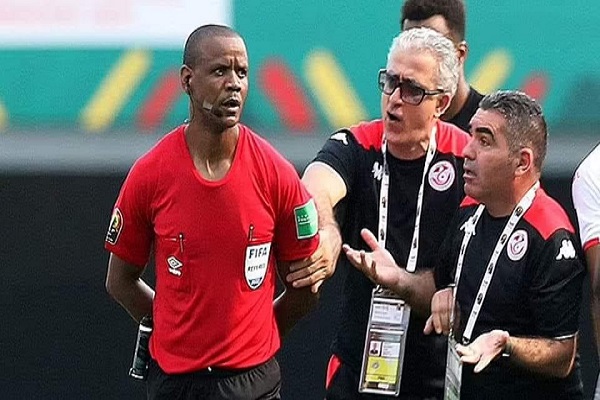 The Africa Cup of Nations (AFCON) clash between Tunisia and Mali ended in disarray after the referee Janny Sikazwe blew for full-time twice.

He signalled the end of the match and a 1-0 win for 10-man Mali at 85th minute and later at 89 minutes and 47 seconds when the game restarted.

During the game, he also awarded a penalty early in the second half after Ellyes Skhiri was deemed to have blocked Boubakar Kouyate’s shot with his arm.

Sikazwe awarded another penalty with just 15 minutes on the clock after Wahbi Khazri’s shot smacked into Moussa Djenepo’s hand.

The referee originally missed the handball and needed VAR to bail him out.

The match ended in confusion amid bizarre scenes as the Tunisian team complained that the referee had blown the final whistle too soon.

This made the Tunisian coach Mondher Kebaier, and his staff, who charged to the field to express their anger. Security guards escorted the officiating team off the pitch.

Sikazwe is not new to controversies. He is one of Africa’s most decorated referees.

He was born on May 26, 1979, in Kapiri Mposhi, a city three hours north of Lusaka, the Zambian capital.

Sikazwe was named among the six African referees at the Russia 2018 World Cup.

However, not all those events went off without a hitch.

In the 2016 Club World Cup final between Real Madrid and Kashima Antlers, Sikazwe made headlines as it appeared the official was preparing to show Sergio Ramos a yellow card before realising he had already booked Ramos previously in the match, and subsequently refrained from giving Ramos a second booking.

Sikazwe, after the match, explained that the confusion came from miscommunication with his assistant referee who spotted the foul, with Sikazwe believing to have heard his assistant indicate a card should be shown before it was clarified that his assistant instead had said “no card” over the earpiece.

Just two years later, Sikazwe was again under fire for an incident in a CAF Champions League match between Esperance de Tunis and Primeiro de Agosto.

After Sikazwe awarded Esperance a controversial penalty early in the match and ruled out a Primeiro goal later, a corruption complaint was lodged and Sikazwe was provisionally suspended.

The suspension was, however, lifted by FIFA in January 2019, saying there was no sufficient evidence to substantiate the corruption allegations made against Sikazwe.

AFCON 2021: How Super Eagles Will Play Against Sudan – Eguavoen Speaks