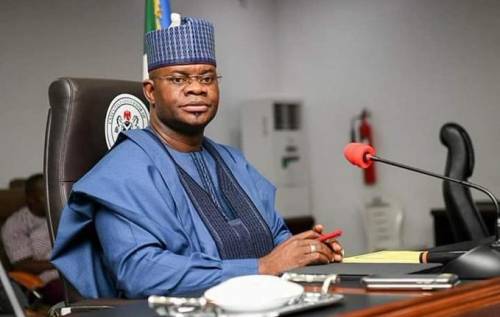 The Rescue Nigeria Mission, a political movement canvassing support for Governor Yahaha Bello of Kogi State to be President in 2023 has said the governor would not step down for any aspirant ahead of the All Progressives Congress primary.

Bello was among the first set of aspirants to declare interest to contest the 2023 Presidency under the platform of the All Progressives Congress.

The National Coordinator of RNM, Abdullahi Shuaibu Damati, during a rally on Saturday in Abuja to drum support for Bello ahead of APC presidential primary, said the governor would not disappoint his supporters for any reason.

According to him, the Nigerian youth are ready to cast their votes for Yahaya Bello in 2023, as they hope he will clinch the presidential ticket of the APC.

“We are a group of Nigerian youth that come across the 36 states of the federation, we are over 15 million waiting for the day of election to cast our votes to Yahaya Bello”, Damati said.

When asked if Bello would step down he said “there is nothing like that at all because Yahaya Bello is a man of his words; all the Nigerian youth are with him, over 20 million youth are ready for him, I don’t think he will ever disappoint them at any time for any reason”.

While expressing hope that Bello would win the APC ticket to contest in 2023, Damati said other aspirants sharing money to delegates were doing that at their own risk.

“We are very hopeful, we have the support of all the party stalwarts, those who are going around sharing money are doing that at their own risk.

“All Nigerian youth have shown clearly that they want Yahaya Bello to become the President in 2023. This event is happening in the 36 states of the federation. So Yahaya Bello stand a better chance to win the primaries”, he said.