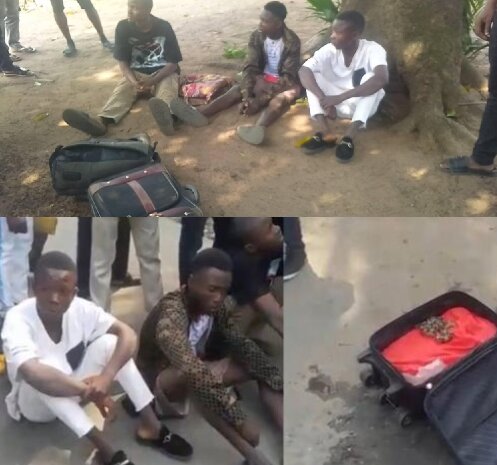 Three suspected fraudsters popularly known as Yahoo boys were Wednesday caught in an Imo hotel with live snake in their briefcase.

it was gathered that the fraudsters who are between 15 and 17 years old came into Imo from Rivers state before news of their presence was heard, and the security operatives went to arrest them in the hotel located around Aladinma area of Owerri, the state capital.

According to an eyewitness, when the box they were with was opened, a live snake was surprisingly seen.

On interrogation, they said that a native doctor in Rivers state gave them some marks on their bodies, and put some dollars in the box but were surprised that a live snake was seen in the box when it was eventually opened.

They were eventually taken to the Aladinma Police station where residents who heard the news rushed to catch a glimpse of them.

The state Police command was yet to confirm the incident at the time of filling this report.