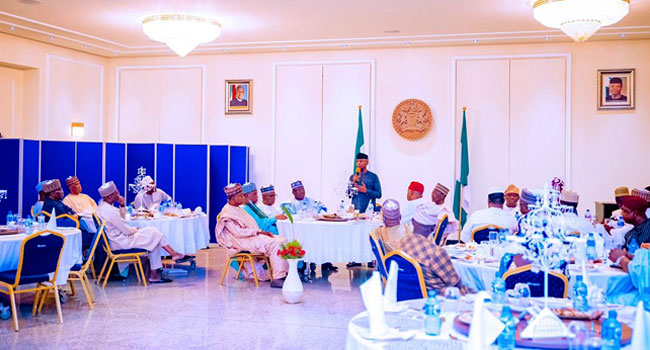 The Vice President, Professor Yemi Osinbajo, has solicited the support of the senators of the All Progressives Congress (APC) for his presidential bid.

He made the request on Tuesday hosted when he hosted the lawmakers to an iftar dinner at the Aguda House within the Presidential Villa in Abuja, the nation’s capital.

Iftar is the evening meal with which Muslims end their daily Ramadan fast at sunset.

The Senate President, who led the lawmakers to the villa, briefed State House correspondents after the dinner, saying the conversation with the Vice President was cordial.

He, however, gave no word on whether the APC senators would give Osinbajo the support he requested.

Lawan assured Nigerians of the Senate’s unwavering support of the growth and development of the country.

The dinner comes one day after the Vice President declared his intention to run for President in 2023.

The photos below capture the highlights of the dinner: Credit: Channels TV