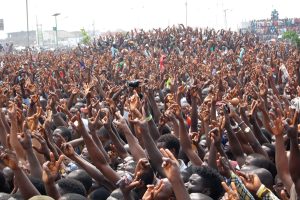 As religion continues to dominate the polity in the countdown to the 2023 presidential race, the Nigeria Youth Congress (NYC), has appealed to youth not to be influenced by such sentiment in choosing the best leaders that would salvage Nigeria out of its current economic and socio-political doldrums.

The NYC said that the youth must think deeply and ruminate on who is best suited for leadership positions at all levels, irrespective of their religious inclinations so that the country would have strong leadership that could deliver.

The Chairman of Ekiti Chapter of NYC, Ambassador Tosin Adesuyi, said this in Ado Ekiti on Saturday at a programme that commemorated the 2022 International Youth Day.

Adesuyi lamented how youth in Nigeria were being sidelined in governance and other areas of human endeavour.

Read Also: People Who Are Genuinely Happy Are Not On Social Media – Actress Didi Ekanem

He appealed to the Nigerian productive population to allow intergenerational partnership that could benefit their lives rather than seeing older people at leadership positions as enemies and rivals.

He said: “As youths, we must have a deft  understanding of our country to enable us make a sound choice of bringing about true, genuine and concerned leadership that will be  create a new  world for all ages in the forthcoming transitions.

“We must exercise and as such concentrate energies on things that matters towards intergenerational solidarity rather than religious sentiment, and unfounded primordial sentiments that can further destroy and fracture our nation.”

Adesuyi appealed to the Ekiti State’s Governor-elect, Mr. Biodun Oyebanji, to place high premium on youth development in order to wean them of criminal tendencies and safeguard the country’s future.

He said: “Let all agree that all hopes are not lost and trust in all our energies patriotically, devoid of self to appeal and encourage the government of Ekiti in waiting to do everything possible to live up to expectation by being genuine, real and proactive on the subject matter of youth development.”

Speaking further about how the youth were being neglected, the NYC leader, said: “It is a notorious fact that poverty reduction, social inclusion, sound health care, youth development, job creation and industrialisation have remained the subjects with which our leaders campaigned with, but they deliberately introduced division to influence our thinking, we must reject this.

“The time to stop is no other than now. All the youth forces must combine, collaborate, synergise and unite in the efforts to combat all manipulations, so that we can have a united nation where all ethnic and religious groups can see themselves as one.”

Why APC Should Retain Power, By Group