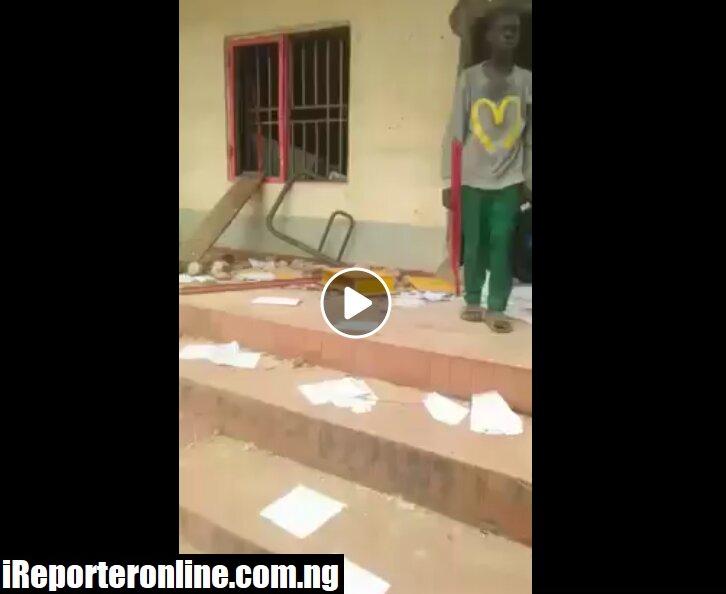 The vandalism was captured in a video that went viral on Friday by students of the school, who were on rampage, attacking teachers, police officers, destroying cars, and setting offices ablaze.

An insider, who did not want his name in print, said though they were shocked at what happened, they were anticipating security problems as it has always been so, whenever they were writing exams.

“As our tradition here during the end of every term examinations, we do invite security officers to avoid any breakdown of law and order. So, the examination was to stop at the 10th of December, days before vacation.

“But, days before the exams started, we were battling with students throwing bangers and other explosives in the compound.

“So, when the examination started on Friday, December 3, we invited some policemen and vigilante members in case of any eventuality, because we anticipated that there could be disturbance, and the first set of policemen came, while we wait for other police officers.

“One of the policemen on duty was moving around the school compound, what happened is what some of us don’t know. But we saw that the students were chasing the policeman, so some of his colleagues came to rescue him, that was when the students started throwing stones and other weapons.

“So, when it became uncontrollable, teachers started running for their lives, then the children went on rampage destroying everything on sight, the police was called from the state command but they could not control them.

“It was when, they invited the DSS people that used gunshot to scare them away. Later, the DSS personnel arrested about 45 of the students, who were hiding in the bush. They are now at the police command,” he said.

Reacting, the state Police Command Public Relations Officer (PPRO), Bello Katongs, said some of the students had been arrested, while some had been charged to court.

“Already, 49 students have been arrested and are in custody,” he said.

Hearing On Fate Of Buhari’s Presidency Gets New Date