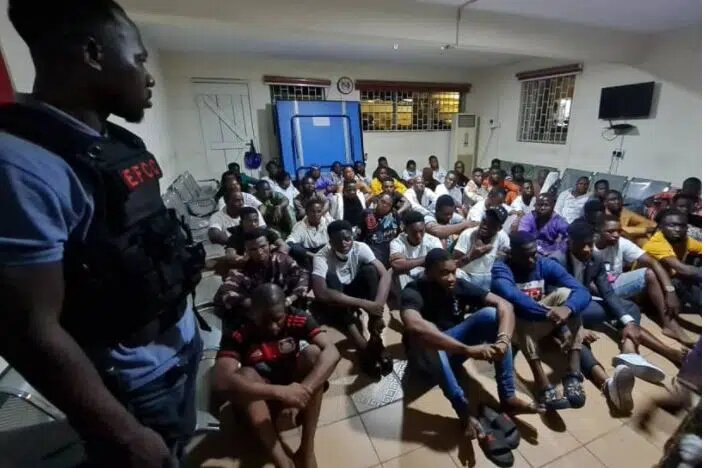 The Economic and Financial Crimes Commission (EFCC) has confirmed the arrest of 60 suspected internet fraudsters a.k.a. Yahoo boys in Ogun.

EFCC Head of Media, Wilson Uwujaren, announced this in a statement on Monday evening.

According to Wilson, they were nabbed at a ceremony at the Conference Hotel in Abeokuta, the state capital.

The facility is said to be owned by Gbenga Daniel, a former Ogun Governor, and All Progressives Congress (APC) chieftain.

Items such as exotic cars, electronic devices, laptop computers, and mobile phones were recovered from them.

The suspects will soon be charged to court, the spokesman added.

Read the statement below;

“Operatives of the Lagos Command of the EFCC have arrested 60 suspected internet fraudsters during an awards ceremony at the Conference Hotel in Abeokuta, Ogun State. The event tagged “Peer Youths Awards”, investigation revealed, was organized to reward high-level internet fraudsters. Items recovered from the suspects at the point of arrest include exotic cars, electronic devices, laptop computers and mobile phones. The suspects will soon be charged to court.”

What I Told Kanu In DSS Custody – Orji Kalu Reveals