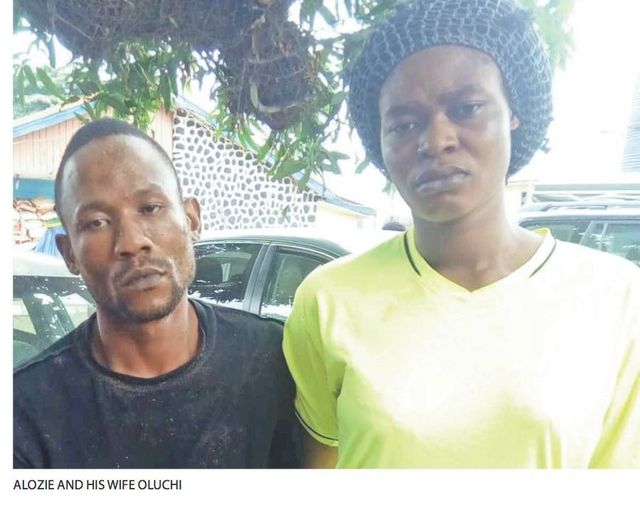 How We Kidnapped, Killed And Burnt 71-Year-Old Man – Suspects Confess

Some operatives of the Anti-kidnapping Squad of the Imo State Police Command have arrested an ex-convict, a 35-year-old Onyekachi Alozie and his wife, Oluchi, alongside another ex-convict , Agubata Maxwell Chimezie, 39.

The gang was alleged to have kidnapped, murdered and burnt a 71-year-old man, Chief Precious Okorie.

It was gathered that the gang had accused Okorie of having an amorous relationship with Alozie’s wife, Oluchi, while the husband was serving a jail term at the Nigeria Correction Centre, Owerri.

The septuagenarian was killed after his family, who had been asked to pay a N20million ransom, paid N1.5million to the gang in the forest at Ochiogwa in Mbaitoli Local Government Area of Imo State.

He added that the family members thereafter reported the case to the Anti-Kidnapping Squad.

He further explained that he ordered the commander of the Anti-Kidnapping Squad, Oladimeji Oyeyiyewa, and his operatives to swing into action after which they subsequently arrested the gang leader, Agubata Maxwell Chimezie a.k.a “the boss” on December 10, 2021.

Oluchi was picked up on December 20 while her husband was arrested on January 10, 2022 in Owerri.

Alozie, who was said to have allegedly masterminded the kidnapping and murder of Okorie, took the police operatives and family members of the victim to the forest where they saw the burnt body of the deceased.

Oyeyiyewa explained that the operatives recovered the late Okorie’s car, a Toyota Camry from the workshop of an auto painter through the gang leader.

It was gathered that he had taken the car for repaint and later sold it for N1million.

Alozie and his gang members had also kidnapped another victim, 35-year-old Kenneth Alajamba on October 22, 2021 at Ohi Junction, Owerri, it was learnt.

“They blindfolded him and took him to their den in the forest where they collected his Toyota car and ATM card and withdrew N3.5 million from his account. There was an identification parade and the victim identified Onyekachi Alozie who also confessed to the evil act.”

Oluchi explained her involvement in the alleged crime to newsmen.

She said, “I attended Comprehensive Secondary school at Mbaitoli and got married to Onyekachi Alozie six years ago. I have three children for him. I was arrested by the Anti-Kidnapping operatives on December 20,2021 in my sister’s house in Owerri over the death of Chief Precious Okorie.

“It was when I was having a phone conversation with Chief Okorie that my husband heard everything about how the deceased wanted to see me. My husband got angry and forced me to call him back. The next day, my husband insisted that I should call Chief Okorie around 3.00 pm and threatened that if I didn’t call him, he would kill me. I had to call Chief Okorie and told him to meet me at the hotel, that I would join him soon.

“While he was on his way to the hotel, my husband and his gang member waylaid and kidnapped him. Whenever I asked my husband about the chief, he would warn me to shut up and threaten to kill me. He told me to carry the three children and ran to the village. That was how I was arrested by the Anti-Kidnapping operatives. I don’t know how my husband and his gang killed Chief Okorie.”

Alozie however, confessed to the alleged kidnapping and killing.

He said, “I attended Daughter of Mary Mother Mercy Primary School, Aba and proceeded to Amache Boy Secondary School in Anambra State. I am an electrician by profession. Later I went into armed robbery and kidnapping. I went to the Nigeria Correction Centre twice over kidnapping cases. I was detained at the Nigeria Correction Centre after I was arrested and prosecuted by DSS operatives in 2018. I was discharged by an Nkwerre High Court and released from prison in 2021.

“I have been involved in several armed robberies and various kidnapping in Owerri, Imo State. When I was at the Nigeria Correction Centre, my wife Oluchi was visiting me and bringing food. I didn’t suspect her with late Chief Okorie. She only told me Okorie was a Good Samaritan. Then one day, I overheard their conversation on phone, where Okorie was saying he was eager to see my wife. I was angry and forced my wife to call the deceased to see her in the hotel. My wife has confessed to me that she has been having a sexual relationship with the 71-year-old man in the hotel.

“I threatened to kill my wife, and so she called him back and told him to wait for her in the hotel. I then arranged for him to be kidnapped. My gang leader, Agubata Chimezie a.k.a “the boss” kidnapped Chief Okorie in his car and took him to the forest. I demanded a ransom of N20million but the family members paid only N1.5m as ransom.

“Agubata Chimezie said I should carry the deceased’s car, a Toyota Camry and meet them at Irate and we drove to a hotel in Owerri where the gang leader collected the deceased’s car and sold it for one million naira. He gave us N290,000 from the  proceeds of the car sales. I didn’t know how they killed late Chief Okorie and how they burnt his dead body. It was some of our gang members who did the job. The N1.5m ransom collected from the deceased’s family members, they didn’t give me anything as my share. It was the second time that they were demanding another ransom from the deceased’s family member that they promised to give me a share.”

The alleged gang leader, Chimezie, also said, “I attended Unity Primary School Amaigbo, and proceeded to Tick Tiger Memorial Secondary School Amaigbo, Imo State. I studied Nursing and graduated in 2007. I did my NYSC in Yobe State in 2007/2008. I practised and have a shop for pharmaceuticals where I sell drugs and treat patients. I am married and have five children. I have been involved in several armed robberies and kidnapping. I knew Onyekachi Alozie when he left the Nigeria Correction Centre and he used to meet me in my restaurant. It was there we started the armed robbery and kidnapping business.

“I am from Nnanator Maiguo Nkwerre L.G.A of Imo State. Onyekachi was calling the relatives of the victims and they came and dropped N1,550,000. We later beat the deceased to death and we burnt his body, according to the directives of Onyekachi who wanted revenge from the late chief for sleeping with his wife. l was the one who told Onyenkachi to drive the Toyota Camry of late chief Precious Okorie to meet me in Owerri. I sent N290,000 to Onyekachi for the car. I wanted to give him more money later. I took the car to the painter’s workshop before I was arrested by the Anti-Kidnapping operatives on December 10, 2021.”

Read Also Emir Of Daura To Turban Amaechi (See Why)

Furthermore, another victim of the gang, Kenneth Alajemba, 35, also said, “I hail from Umunoha in Mbaitoli Local Government Area of Imo State. I am into paints production. I was kidnapped on October 22, 2021 at Ohi junction axis around 7.30pm. I was coming from work in my Lexus E5 350 and as I got to the entrance of my house, I wanted to open the gate, I saw the kidnappers in police uniform.

“Suddenly, they pushed me inside their Sienna car, and later they blindfolded me before taking me to their destination- their den in the forest. They took my Ipad and ATM card and I gave them my PIN. They withdrew N3.29 million. I was in their custody for two days. I was given half cooked rice to eat. It was on October 24, 2021 that I was released. Later, I reported the case to the Anti-Kidnapping Squad.

“There were six gang members who kidnapped me and took my car away. They drove me to Atta junction near a bush and left me there. When I was sick, the kidnappers bought me drugs so that I would not die in their custody because of the money they saw in my bank account.

“Yes, we kidnapped Kenneth Alajemba on October 22,2021 at Ohi Junction. We kidnapped him while he wanted to enter his house. We put him in our car and later took him inside his own car. We blindfolded him and took him to our den in the forest. We took his IPad, phone, car and ATM card and his PIN – personal identification number. We withdrew N3.5million, and we have shared the money among ourselves,” he stated.

The family of the deceased said arrangements were being made for his burial.

The Imo Police boss said the suspects would soon be charged to court while other gang members who were still at large would be arrested.

A Nigerian Soldier Was Involved In Robbery, See The Judgement That He Got