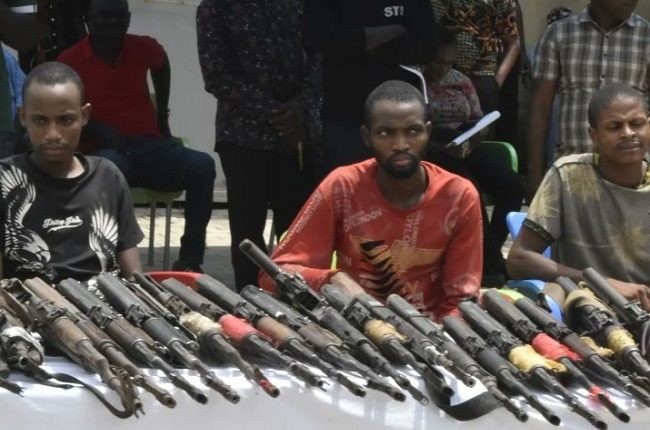 A suspected kidnapper of the Students of Greenfield School in Kaduna, on Wednesday, narrated how his gang members kidnapped, raped and thereafter shot the students to death.

The suspect identified as Aminu Lawal whose gang was operating along the Abuja-Kaduna Expressway before his arrest by the Operatives of the Force Intelligence Bureau Special Tactical Squad (FIB-STS) led by DCP Kolo Yusuf was paraded along with 20 others in Abuja by the Force Public Relations Officer (FPRO), CSP Olumuyiwa Adejobi, for offences ranging from kidnapping, conspiracy, armed robbery, illegal possession of arms and ammunition’s to cattle rustling amongst others,

Lawal disclosed that his gang members operated along with other syndicates in Kaduna under the leadership of one Yellow Asar.

Also during the parade, another kidnap suspect demonstrated how the captured were chained together before taking them to their base for profiling.

According to the FPRO, “this press briefing is to inform members of the public about the efforts of the Police in decimating the activities of criminal elements who perpetuate crimes in Nigeria and to showcase the achievement of the operatives of the Nigeria Police Force in the general maintenance of law and order, public safety and stability of our dear country.

“Today, before you are a total of 21 suspects, who have been arrested in connection with offences ranging from Conspiracy, Kidnapping, Armed Robbery, Culpable Homicide, Rape, Unlawful Possession of Prohibited Firearms.”

The Force Spokesperson said that the arrest of the suspects followed the directives from the Inspector-General of Police, IGP Usman Alkali Baba, to clampdown on the perpetrators of crimes and criminality, as well as cutting off their supply of arms which had led to the arrest of 21 suspects connected with major violent crimes including Kidnapping, Culpable Homicide, Rape, Unlawful Possession of Firearms, etc.

According to him, prominent among the cases include a case of kidnapping where the duo of Aminu Lawal (aka Kano), and Murtala Dawu (aka Mugala), both working in synergy with the kidnap kingpin known as Yellow Ashana, confessed to the kidnap and murder of two police officers and one vigilante in 2021.

“They equally confessed to the kidnap of students from the Greenfield University in Kaduna State, the mindless murder of five victims before the payment of ransom, and the eventual release of the others.

“Intelligence shows that their area of operations includes Dan Hunu, Kekebi, Dan Busha Rido, Maraban Rido, and Kumi Sata, all in Kaduna State. FIB-STS operatives caught up with them in March 2022, after being on their trail upon the mention of their names in connection to the kidnapping of Bethel Baptist School students in 2021.

Similarly, a five-man trans-border syndicate that carried out kidnapping operations between Adamawa State in Nigeria, and Burha, Fituha, and Kesu in Cameroun were arrested.

According to him, “they confessed to the kidnap and multiple rapes of a newly wedded woman at Askira Uba Local Government Area of Borno State whom they released upon receipt of a million Naira ransom.

“They were apprehended by operatives of the FIB-STS after collecting a ransom sum of 2 million Naira for one Alhaji Moni of Buladega Village on the 11th of May, 2022.

According to him, “they were arrested at the market, upon credible intelligence that they would be there to buy food items for their kidnap victims.

“They confessed to many heinous crimes including the killing and beheading of one Alhaji Mai Gome, even after ransom payment had been made.

The suspects who confessed their involvements in the various Cases brought against them by the Police pleaded for forgiveness with a promise to turn a new leaf.

However, the force spokesperson said that all of them would be arraigned in court on completion of investigations where they would make the plea for forgiveness.

He said that Inspector General of Police, IGP Usman Alkali Baba while commending the FIB-STS operatives for the successes recorded, assured that all criminal elements would be smoked out of their hiding places and would answer to their crimes in due course.