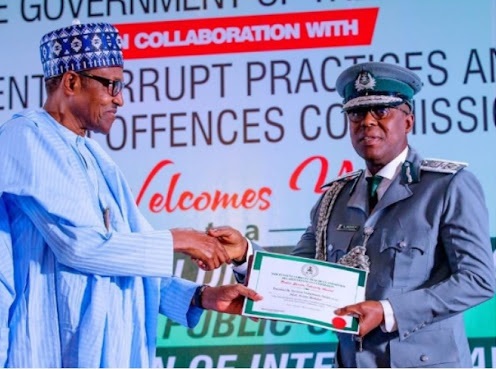 President Muhammadu Buhari on Tuesday in Abuja honoured two civil servants, Muhammad Ahmad and Nelson Okoronkwo and a Nigerian student in Japan for exhibiting exemplary acts of honesty and integrity.

He recently recovered and declared to the Agency 24,500 dollars offered as a bribe by a drug baron.

The money was meant to compromise an investigation of 28kg of cocaine worth billions of Naira.

Mr Okorokwo, currently a staff of the Federal Ministry of Information and Culture, was also recognised for his consistent acts of integrity in the different ministries where he previously served.

He was a committee member on fertiliser distribution that led to the recovery of billions of naira from racketeers with collaborators in the Federal Ministry of Agriculture and Rural Development.

He was also credited to have reported corrupt practices that led to the Ogoni clean-up investigation in the Federal Ministry Environment.

As Committee Chairman on Illegal Recruitment in the Federal Ministry of Information and Culture, the Deputy Director facilitated the detection and removal of more than 3,000 fake employers from the Service.

The act saved the government millions of naira in terms of salaries and emoluments.

Ikenna Nweke, a PhD student from Imo studying in Japan, found a wallet containing a large sum of money and other valuables.

He returned them to the Japanese Police where he also declined 10 per cent of the money he found when a reward was offered to him.

On Mr Nweke who joined the event virtually from his base in Japan President Buhari said: ‘‘I am also happy to note the ICPC special award the PhD student from Imo State studying in Japan.

‘‘He has done Nigeria proud in far-away Japan by displaying traditional Nigerian values of honesty and integrity and returning a wallet containing a very large sum of money and other valuables to the police.

‘‘He also declined 10 per cent of the money found as a reward offered to him.

‘‘I join the ICPC in declaring him ICPC CITIZENS ANTI-CORRUPTION VOLUNTEER GROUP ICON.

‘‘He is indeed an icon and a beacon for our youths. I also congratulate all those to be awarded the ICPC Certificate of Integrity through their agencies.’’

Mr Buhari said his administration would not hesitate to punish Heads of Ministries, Departments and Agencies, MDAs, that fraudulently present new projects as on-going projects in the budget.

He warned that the Federal Government would sanction those bringing in personnel into the public workforce through illegal recruitment, or pad their payrolls and retain ghost workers.

“We reduced the cost of governance by maintaining our promise to complete abandoned or on-going projects started by previous administrations.

“We have ensured that MDAs did not put forward new capital projects at the expense of on-going projects.

“Government has, however, noted from the activities of the ICPC that some MDAs have devised the fraudulent practice of presenting new projects as on-going projects.

‘‘Necessary action and sanctions will continue against the heads of such errant MDAs.

“I am confident that ICPC will continue to maintain the vigilance required of her by the ICPC Act in this regard,’’ the President said.

Read Also JUST IN: Many Killed As Military Helicopter Crashes

The president described the summit with the theme: “Corruption and Cost of Governance: New Imperatives for Fiscal Transparency,’’’ as auspicious.

He noted that it reminded Nigerians of the negative impacts of unnecessary cost of governance.

He added that the theme also offered an opportunity for stakeholders to offer suggestions on ways to further reduce the cost of governance and promote transparency and accountability in government expenditure.

‘‘I am delighted that the Legislative and Judicial arms of government are also under focus on managing the cost of governance.

“Government is a collective and is not the business of the Executive branch alone.

‘‘I am delighted that some public officers continue to demonstrate the core values of ethics, integrity and patriotism, and have been identified for their sterling anti-corruption disposition in their workplaces,’’ President Buhari said.

The event was attended by the Chief Justice of Nigeria, Ibrahim Muhammad and a representative of the Senate President, Ahmed Lawan.

In his remarks, ICPC chairman, Prof. Bolaji Owasanoye, reiterated the commitment of the Commission to supporting the programmes and projects of government aimed at restraining the spiralling cost of governance.

He noted that the astronomical cost of governance at the federal and sub national levels had continued to reflect in the huge wage bill on personnel and operational cost standing at about 70 per cent of annual budget.

He identified illegal recruitment, illegal and unilateral increase in wages and remuneration by some MDAs as some of the factors responsible for high cost of governance and rising personnel budget.

Other factors, he said, were indiscriminate local and international travels, unreasonable demands by some political appointee board members of MDAs and budget padding.

According to him, ICPC is investigating some cases of illegal recruitment forwarded to it by the Office of the Head of the Civil Service of the Federation.

He said the Ministry of Labour and the University College Hospital, Ibadan, and some employees of other MDAs had been implicated in illegal recruitments.

“This abuse of power is consummated with complicity of compromised elements in IPPIS. These cases are currently under investigation.

“At another level, a syndicate of corrupt individuals within the Service corruptly employ unsuspecting Nigerians and issue them fake letters of employment.

“They fraudulently enrol the recruits on IPPIS and post them to equally unsuspecting MDAs to start work.

“ICPC is prosecuting one of the leaders of the syndicate.

“From his custody, we retrieved several fake letters of recommendation purportedly signed by the Chief of Staff to the President, ministers, Federal Civil Service Commission and other high ranking Nigerians,’’ Mr Owasanoye said.