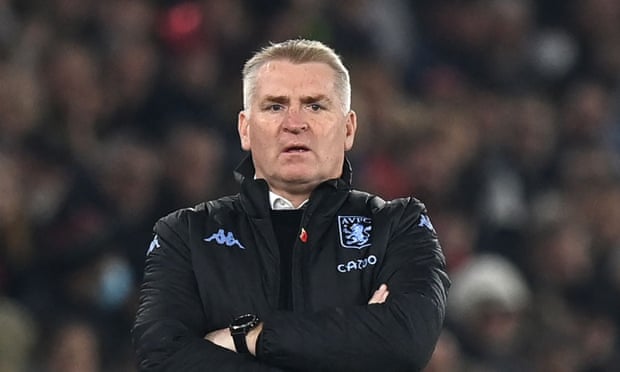 Dean Smith has been sacked as the head coach of Aston Villa 11 games into the Premier League season.

Villa have endured an underwhelming start to the campaign, with Friday’s loss to Southampton – the club’s fifth league defeat in succession – apparently the final straw. “This year we have not seen the continuous improvement in results, performances and league position which we have all been looking for,” said the club’s CEO, Christian Purslow.

“For this reason we have decided to make a change now to allow time for a new head coach to make an impact. The board would like to sincerely thank Dean for his many excellent achievements, on and off the pitch, during this time.” The club have also tweeted a lengthy video tribute to Smith on social media.

Smith, who grew up in the West Midlands and was a boyhood Villa fan, was appointed as head coach in October 2018 with the club 14th in the Championship. He oversaw promotion in his first season in charge and then an impressive first year back in the top flight, as well as a run to the final of last season’s League Cup.

The side have struggled this term, however, after selling Jack Grealish to Manchester City in the summer. “No1 will ever compare – the real goat,” the erstwhile Villa captain tweeted alongside claret and blue hearts after Smith’s departure was announced.

Purslow’s comments concluded: “Everyone knows how much Aston Villa means to Dean and his family. He has represented the Club with distinction and dignity – universally liked and respected by everybody associated with Aston Villa – our staff, players and supporters alike. We wish him the very best.”

His dismissal comes less than a day after that of Daniel Farke by Norwich. Five Premier League managers have now been sacked this season, one more than in the whole of the 2020-21 campaign.

Villa were immediately linked with Southampton’s Ralph Hasenhüttl, the Rangers manager Steven Gerrard and Paulo Fonseca. The Denmark coach Kasper Hjulmand is highly thought of by the club’s ownership group which includes the Danish sporting director Johan Lange. He is also an admirer of Brentford’s Thomas Frank.

Smith’s former No 2 John Terry, who left the club in the summer, was among the bookmakers’ favourites to make a return but Villa have poured cold water on that notion.