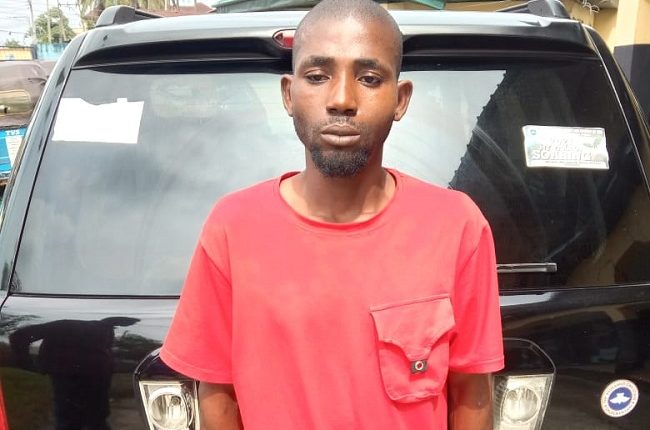 A man, who has been arrested by operatives of the Delta State Police Command, says he killed his 20-month-old son after a man instructed him in a dream to kill and rub his son’s blood on his head in order to become rich.

The suspect, Volt Blessing Gabriel, age 33, who killed his son, Godspower Gabriel, was arrested after his wife, Success Oduwa, reported to the police that her husband could not account for the whereabouts of their son after he took him away from her.

“The husband told her that the child is with his sister in Warri. On getting to Warri, she stated that she discovered the husband was lying to her, hence her suspicion.

“She reported to the Commander, Quick Response Squad, that she is suspecting her husband named, Volt Blessing Gabriel (m) age 33yrs of the same address, to have killed their child named Godspower Gabriel (m) aged one year and eight months for ritual purposes.

“The Commander RRS detailed operatives who swung into action arrested the husband and handed him over to the DPO ‘A’ Division Warri for further investigation.

“Upon interrogation, the suspect confessed to have murdered the said child at Ewabogun bush by catholic road, Benin city using a hand saw to cut off the head and buried it by a palm tree in the bush and threw away the headless body of the child.

According to him, the suspect is in police custody for further investigation.