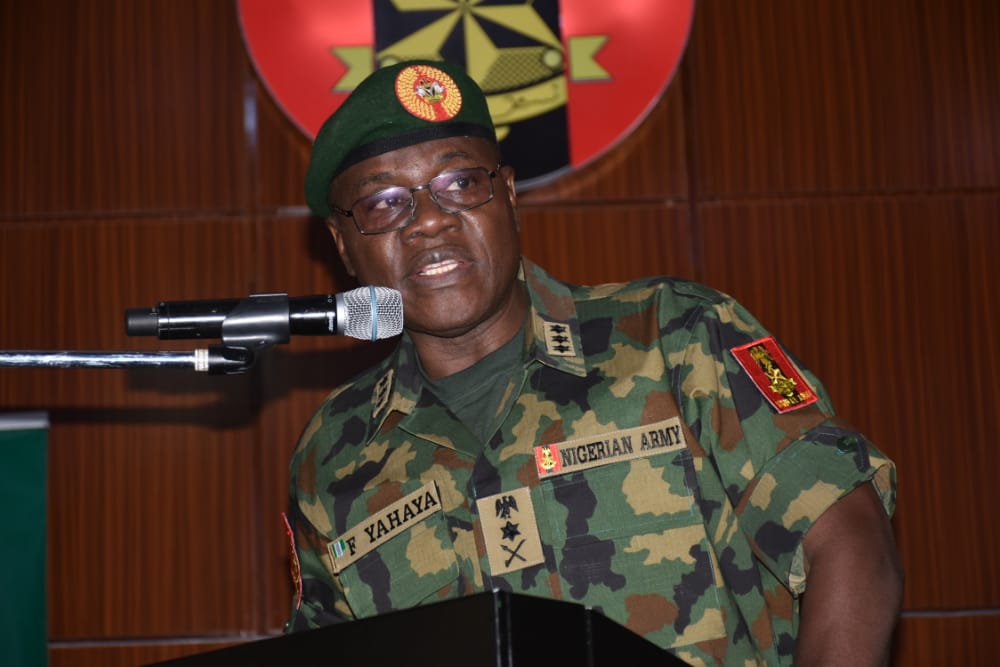 The Army Staff, COAS, Faruk Yahaya, disclosed this on Wednesday, in Abuja at a news conference to mark the commencement of the NADCEL 2022.

Mr Yahaya, who was represented by the Chief of Policy and Plans (Army), Maj.-Gen. Anthony Omozoje, said the theme for year would be “Repositioning the NA in the Joint Operations Environment: A Panacea for Success in Addressing Contemporary Security Challenges”.

He said the Nigerian army, saddled with the constitutional mandate of defending the territorial integrity of the nation had a rich history dating back to 1863, when Lt. Glover of the Royal Navy organised 18 indigenes of Northern Nigeria into a local force known as the “Glover Hausas”.

The COAS said the local force went through several stages of metamorphosis and eventually became part of a larger military body established by Lord Fredrick Lugard in 1900 known as the West African Frontier Force (WAFF).

“NADCEL as you are quite aware is an annual event of the Nigerian army, held on every July 6, to commemorate the day the unfortunate Nigerian Civil War broke out, when the very first shot that commenced the war was fired at Garkem in the present day Cross River State.

“It is worthy of note that the first NADCEL was celebrated in Lagos in 1978.

“This year’s celebration marks the 159th year of Nigerian Army’s existence since its formation,” he said.

Mr Yahaya said that July 6, was set aside to remind Nigerian army about its past and the need to employ tactful and mediatory conflict resolution approaches rather than resorting to armed conflict.

He added that the event was to also reminds them of the ‘No victor, no vanquished’ slogan at the end of the civil war underscoring the need to promote national unity, peace and cohesion strengthened by diversities.

According to him, the week-long event would also offers the Nigerian army an opportunity to take stock, assess its performance, interface with the public, and set goals for the succeeding year.

He said that the activities would be conducted with a view to maintaining a highly professional army, well trained, combat ready and effectively positioned to perform its constitutional roles.

According to him, the celebration is scheduled to hold from July 1 to July 6, to celebrate the army’s achievements and also showcase its operational activities, transformational strides in innovation, development, civil-military cooperation, research and technological advancement

“The celebration is also aimed at projecting the Army as an instrument of national unity, integration and as well highlighting the achievements, as capabilities and positive corporate image and reputation of the Nigerian army,” he said.

Read Also God Has Not Told Me To Support Atiku, We’re With Wike – Ortom

The Chief of Civil Military Affairs, Marcus Kangye, said the choice of Imo was in line with the tradition of taking NADCEL to different parts of the country annually, adding that it had nothing to do with the security situation in the South East.

On his part, the Director, Army Public Relation, Onyema Nwachukwu, said the 2017 NADCEL was held in Monguno, Borno during the heat of Boko Haram insurgency.

Mr Nwachukwu said the military had remained supportive of the democratic governance, adding that the 2022 NADCEL would afford them opportunity to restrategise on its supportive roles to the civil authority.

The NADCEL involved series of activities like Jummat prayer and interdenominational church services across army formations, humanitarian outreaches among other activities.