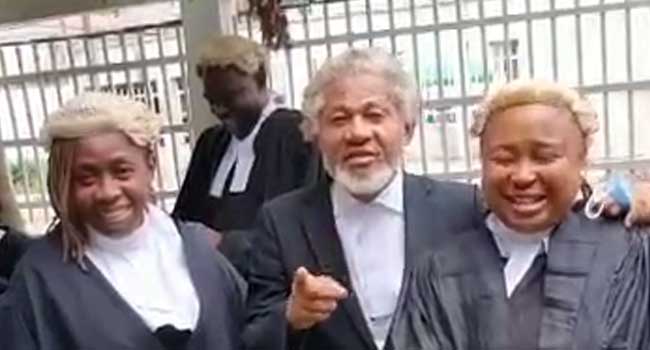 48 hours after he appeared at the Federal High Court, Lagos in his traditional attire, Chief Malcolm Omirhobo, was back again in the same court on Wednesday.

This time he appeared in his normal legal garb and told those who bothered to enquire that this was the way the spirit directed him to appear.

On why he dressed in his normal legal attire, the lawyer said he was led by the spirit.

“I am led by the spirit, the spirit said we should do normal today. Don’t be surprised if you see me the other way tomorrow,” he said.

When asked if the spirit is in conformity with the ethics of the legal profession, Omirhobo took offence and fumed.

While challenging the journalist, he cautioned him against hurling insults at his traditional religion.

He added, “What ethics are you talking about? Are you insulting my religion? Don’t try it. Don’t insult my religion.

“The Constitution, Supreme Court said I should dress according to my religious attire and you are insulting the Supreme Court. Behave yourself.”

On Monday, he had appeared before Justice Tijjani Ringim who refused to hear him because of his dressing.

The judge adjourned his case till October 10, when the lawyer is expected to address the court on why he can appear in his traditional attire.

His actions followed the recent decision of the apex court that female Muslim students in Lagos should be allowed to wear hijab to school.

The lawyer, who hails from Delta State, described his dressing as one usually worn by Olokun worshippers.

It was gathered that his colleagues in the Lagos court looked amused as he took his seat to await the day’s proceedings to begin.

“I am a traditionalist. I have been missing all along until the Supreme Court gave the judgment on Friday that people can now appear in their religious attires of worship in their school and public school for that matter,” he told Channels Television.

“So, in the circumstance, I just interpreted everything and said they have done the right thing by guaranteeing more of our rights under Section 38 of the Constitution that gives Nigerians the freedom of thought, conscience, and religion from that decision that female students can wear hijab because it is the mode of their worship and any attempt to stop them from wearing it amounts to a violation of their fundamental right. I said, ‘It is good!’

“So, I said I need to also be appearing in my religious attire of worship because it is good for man to be with God all the time. This is my mode henceforth.”