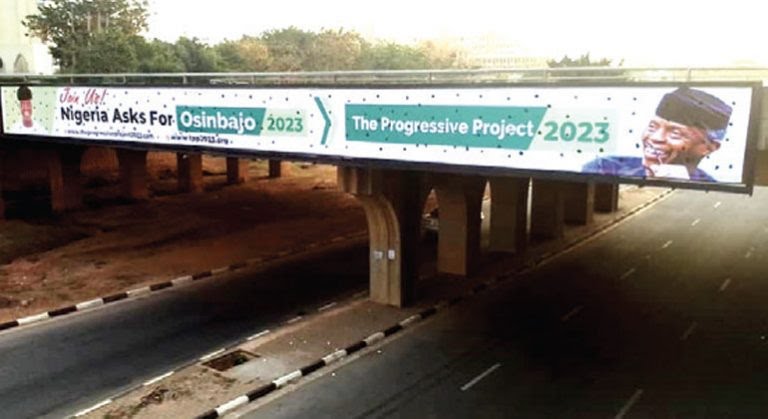 A large presidential campaign billboard bearing the name and picture of Vice President Yemi Osinbajo has surfaced in Abuja, the nation’s capital.

Osinbajo, a member of the ruling All Progressives Congress, is serving his second and final term of four years as the Vice President alongside the President, Major General Muhammadu Buhari (retd.).

It was observed that the campaign banner which was attached to a bridge in a strategic location at the Central Area in Abuja had a picture of Osinbajo.

The campaign banner had the inscription, “Join us, Nigeria asks for Osinbajo 2023.”

Though no party’s name or logo was inscribed on the large banner, it had the name of a group, ‘The Progressive Project 2023’ as the sponsor.

There have been speculations that Osinbajo may be interested in contesting the 2023 presidential election.

Already, some pressure groups canvassing support for him have emerged.

This is just as the national leader of the APC, Asiwaju Bola Tinubu, is also said to be considering contesting the election.

Awesome: All Smiles As Hon Dennis Idahosa Gifts Media Aide With A Car Gift To Usher In The New Year(Photos)