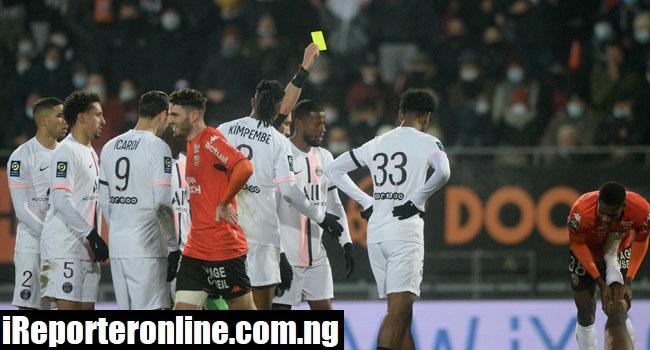 Sergio Ramos was sent off as Paris Saint-Germain salvaged a 1-1 draw away at Ligue 1 strugglers Lorient thanks to Mauro Icardi’s injury-time equaliser on Wednesday.

In their final outing of 2021, PSG trailed in Brittany to Thomas Monconduit’s thunderous first-half strike for Lorient until Icardi rescued a point with a header in the 91st minute.

Ramos had come off the bench at the start of the second half for just his third appearance since moving to France from Real Madrid in the close season, but he was dismissed four minutes from time after receiving a second yellow card.

PSG, with top scorer Kylian Mbappe and playmaker Marco Verratti both missing due to suspension and Neymar still out injured, produced another worryingly sub-standard performance that will put the focus on the coach Mauricio Pochettino.

The Argentine, approaching the first anniversary of his appointment, has struggled to get the very best out of PSG’s array of superstar players, although they sit a huge 13 points clear of their nearest challengers Nice and Marseille at the French season’s halfway stage.

“In terms of results we are still in all competitions, so in that regard, we are doing fine,” Pochettino said.

“In terms of performances, we are still trying to get the best out of the team.

“The first few months of the season have been intense with lots of travelling. We are sure that in time we will get there but we know we need to improve a lot.”

The Parisians, who will play Real Madrid in the last 16 of the Champions League, were lucky to avoid defeat against a Lorient side who had lost their last eight matches and had not won a game in three months.

Nigerian striker Terem Moffi notably squandered a great chance on an early breakaway for Lorient, seeing his effort saved by Keylor Navas in the PSG goal.

Lionel Messi, who still has just one Ligue 1 goal, struck the post with a volleyed effort midway through the first half and Lorient went ahead five minutes before the interval as Enzo Le Fee teed up Monconduit to smash a shot into the top-right corner from just outside the box.

Armand Lauriente was denied by Navas on the hour mark, although Angel Di Maria blazed a great chance over the bar at the other end just before that after being set up by Messi.

Lorient looked set to hold on for a precious victory in their fight to avoid relegation after Ramos was shown a second yellow for a blatant bodycheck on Moffi.

But then, in the first minute of added time, Achraf Hakimi held up a cross from the right and Icardi headed in.

Nice climbed up to the second place, above Marseille on goal difference, after coming from behind to win 2-1 at home to Lens, with Mario Lemina and Justin Kluivert scoring their goals after Arnaud Kalimuendo had put the away side ahead.

Marseille needed a Dimitri Payet penalty in the eighth minute of injury time to draw 1-1 at home to Reims.

Rennes are fourth despite losing 2-1 away at Monaco, with Wissam Ben Yedder’s penalty cancelling out Martin Terrier’s opener for the away team before German international Kevin Volland scored the winner.

Montpellier is fifth after hammering Angers 4-1, while Ligue 1’s leading scorer Jonathan David scored a late winner for his 12th of the season as Lille came from behind to beat Bordeaux 3-2 away.

Struggling Lyon was held 1-1 at home by Metz, and Clermont’s game against Strasbourg was called off at the last minute due to fog.

The French top-flight shuts down for a short winter break before returning on January 7.