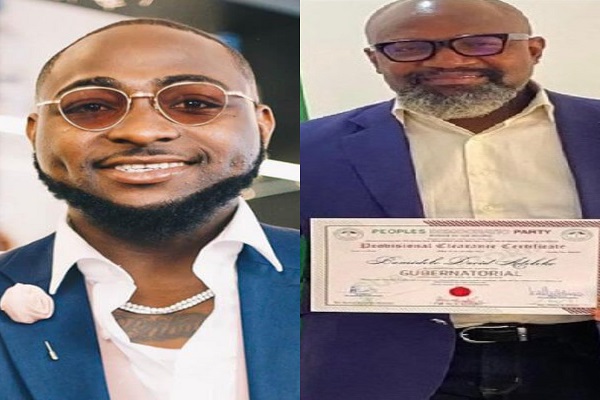 To outsiders, governorship ambition is the bone of contention tearing the Adeleke family members apart in Osun State. The reason is more biological than political! While Bamidele Adeleke is interested in becoming governor of Osun, Admola Adeleke wants to try his luck again at the number one seat in Oshogbo. He tried it once but lost.

On 19 January, Davido, the music artiste, took a dig at his cousin, Bamidele Adeleke, for reportedly disrespecting his (Davido) mom in an article, syndicated to media houses by his (Bamidele’s) minions.

Davido wrote on Twitter: “Because of your ambition you have your people write about me (which I don’t care ) but to include the death of my mother in an article …”

“Same woman that raised you … @deleadeleke001 ok na .. Dele God will reward you.”

“The truth hurt you that much you had to go that low to mention YOUR AUNTY VERO that cared for you .. well .. I don open my crase for the year @deleadeleke001 stay tuned. NEW MUSIC 2MORO!”

“Worst of all this Nigga really doing all this from the house my father gave you ! Audacity ! Disrespect me ! (I don’t care) But my FATHER my MOTHER Never! DELE I WILL STRESS YOU ! We go meet for field ….” he continued.

Davido went further to shared a photograph of Bamidle with a provisional clearance certificate for the Osun State gubernatorial election accusing him of “forming intellectual.”

In David’s words: “Wonderful! I finished university with a 2:1. But it’s now cousin Dele who struggled to even get a 2:2 that is now forming ‘intellectual’.”

“Intellectual that has not succeeded in building one single thing in his own life on his own. This life ehn! Osun beware of FAKES. @deleadeleke001”

The fundamental problem is that Isiaka Adeleke (Serubawon, for style), the late Osun state Governor; Deji Adeleke, the banker and father of Davido and Ademola Adeleke are of the same father and mother. Bamidele’s father shares the same paternal family tree with the three brothers, but not the same mother.

Notwithstanding the differences in maternal genealogy, family sources revealed that Bamidele was not discriminated against. His uncles took him in as one of them. While it is legitimate on his part to pursue his political ambition, dragging the names of senior family members of the family into the contest is what is making Davido and others to blow their top.