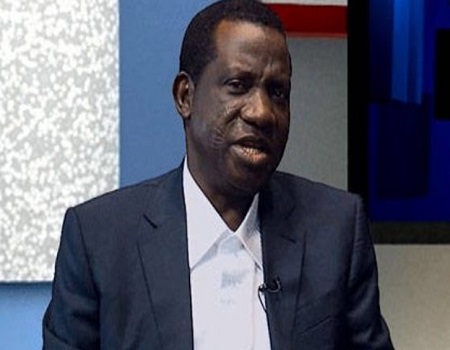 Why I Won’t Support Northerner As APC Presidential Candidate – Lalong

The Governor of Plateau State, Simon Lalong, said he is backing the presidential ambition of a former Minister of Transportation, Rotimi Amachi, saying he won’t back any of the aspirants from the North.

Lalong said Amaechi had contributed immensely to the state in no small measure and would receive full support from Plateau leaders, including former Speakers of the House of Assembly, and current state lawmakers.

In a statement made available to our correspondent on Saturday, Lalong was quoted as  saying, “Amaechi has all the qualities of a good leader, and would save the country from its insecurity problems, as well as bring development to all parts of the country, adding that Plateau State has benefited a lot from Amaechi and it’s payback time.’’

Lalong stressed that Amechi had all it takes to tackle insecurity in the country. He said Ameachi had relationships with the security experts and the former security chiefs and would engage them.

He recalled that Ameachi helped party chieftains in the northern states, especially Plateau State, to join and register with the APC. He also said that the former minister spoke for the state at the Federal Executive Council meetings whenever it needed the urgent intervention and approvals from the Presidency.

“Sir, you invested in Plateau State, that is why you are going to reap in Plateau State. We came back, we had security issues, you were our minister. For most of the approvals you saw from the President, it was this man (Amaechi) that was pushing for us. Amaechi was our minister, not minding that he is from Rivers State. We got almost everything.”

Lalong disclosed that he received ample support for his re-election bid from Ameachi, He also said “They mentioned railway, but you brought Shipper’s Council to us, you restored back our inland container to us, so many things that you did. As I’m talking, the first set of people you took to China, seven of them are Plateau boys, and very soon they are coming back as experts in engineering. We can go on and on.

“We had already taken a decision; all former members of the Houses of Assembly took a decision that wherever you go, we would follow you. So, if you calculate the number of former Speakers that we have in Nigeria, I think you already have 30 per cent votes,” he said.

“I have the privilege to move this historic motion and say categorically, that members of the Plateau State House of Assembly, Chairmen of the 17 Local Government Areas, we have super delegates and national delegates, all represented today, and what I’m doing today is an endorsement by the delegates of Plateau State,” Sande said.

PDP Issues Statement On Primaries Scheduled For Sunday, May 22