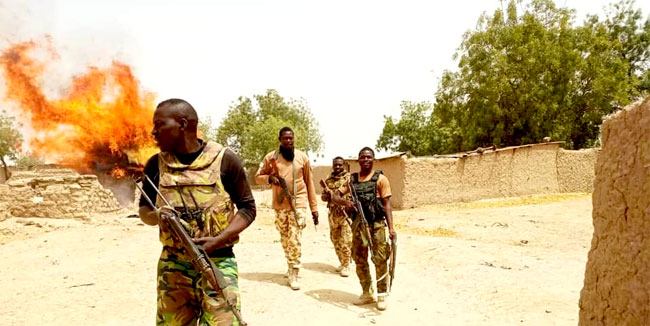 In continuation of its counter-insurgency operations in the Lake Chad Basin area, troops of the Multinational Joint Task Force and Operation Hadin Kai comprising of Nigerien and Nigerian troops, have cleared ten identified Boko Haram settlements in the North East and Lake Chad Basin.

According to a statement by the spokesman of the MNJTF, Lieutenant Colonel Kamarudeen Adegoke, the terrorists fled the cleared enclaves in a bid to avoid being killed by the troops as no contact was made with the criminals during the operation.

However, he said troops were able to recover some items in the cleared settlements, including packed fish in cartons, assorted grains, house hold items and a motorcycle.

In line with MNJTF SOP for operations, the enemy camps were destroyed and the items were properly burnt. About 30 young men who claimed to be fishermen and farmers were arrested in the general area of Doron Naira and are being profiled and interrogated to ascertain their culpability or otherwise.

Similarly, troops of Task Force Mallam Fatori, comprising of Nigerien and Nigerian troops from the MNJTF firm Base in Arege, carried out clearance operations to the general areas of Ali Jimari, Dogon Chuku and Tunbum Rago.

Some Boko Haram elements on sighting the advancing troops, abandoned their motorcycles and an old Hilux Toyota van and fled.

The two motorcycles and the old Hilux Toyota van were burnt in the location by the troops, while in a separate operation, a young Fulani girl named Salamatu, aged about 12 and claiming to be from Darge Kessa Village in Abadam LGA, was found by the Task Force team wandering in the bush.

The MNJTF spokesman said the girl will be handed over to the relevant authorities for further action after necessary profiling.