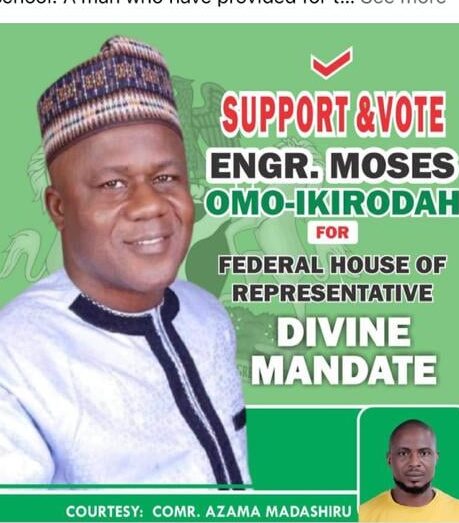 Sons and daughters of South-Ibie in Etsako West Local Govt Area of Edo State have started mobilizing support for the business tycoon, Moses Omo-Ikirodah urging him to represent Etsako Federal Constituency in the National Assembly.

A group under the auspices of the South-Ibie Progressives Forum have met in Auchi to declare their support for Engineer Moses Omo-Ikirodah saying now is the time for him to offer his best services to the people of Edo North.

In a statement made available to reporters in Auchi and signed by its chairman, Mr Aliyu Oshoma, the group insisted that only good leadership would take the front burner in the forthcoming general elections.

In giving credence to the leadership qualities of Moses, Comrade Aliyu hailed his philanthropic activities over the years for the people of South- Ibie and vowed to mobilize support for his success at the poll when INEC conducts the election.

In a related development sons and daughters of South-Ibie have started mobilizing support both online and in some strategic wards within their community. Posters and online banners could be seen calling on the people to support Moses Omo-Ikirodah.

Whatsapp messages were also glimpsed circulating amongst community members on the need to support the PDP chieftain in the forthcoming general elections.

Another Canvasser, Comrade Azama Mudashiru who took out time to introduce Moses Omo-Ikirodah on different social media platforms defined him as a helper who would lead his people to the promised land, calling him a man of gold, Comrade Azama hailed his benevolence and called on all South-Ibie sons and daughters to support their own saying “Better cloth dey sell itself” 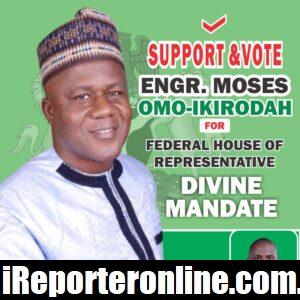