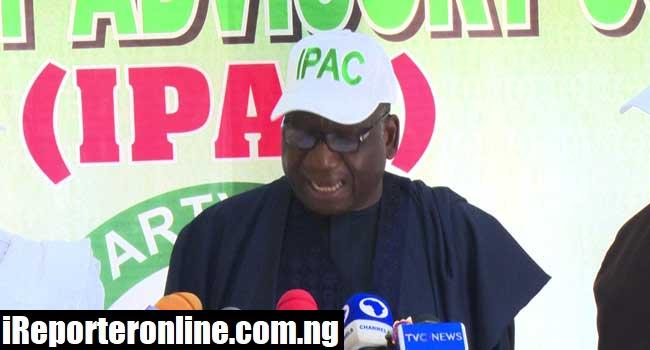 The Inter-Party Advisory Council (IPAC) has reacted to the impasse between the National Assembly and President Muhammadu Buhari, over the president’s refusal to assent on the electoral act amendment bill, describing the move by some lawmakers to veto the president as an exercise in futility.

Although the bill was transmitted to the president on November 19, 2021, Buhari declined assent to the Electoral Act Amendment Bill on December 21 over the direct primaries clause.

Speaking at a news conference on Monday in Abuja, IPAC Chairman, Yabagi Sani appealed to members of the National Assembly to dialogue with the executive arm of government and address those areas of disagreement.

The council also maintained its position against the proposal for direct primaries for political parties, while applauding electronic transmission of results as contained in the Electoral Act Amendment Bill.

“Against the backdrop of Mr President’s decisive aversion to this particular provision of the electoral bill, the use of the veto by the legislature may merely result in a fruitless exercise if at the end of the day, its implementation is not supported by the required funding by the Executive,” he said.

“In summary, if we must call a spade by its name, we in the IPAC are inclined to the opinions that regard the National Assembly’s position on indirect primaries as amounting to an attempt to use up the constitutional rights of parties as to the method of choice of flagbearers.

“The way out of the logjam in our view is for the shifting of grounds by the legislature and executive arms of governments for a compromise and amicable resolution resulting in a win-win scenario. This should not be a given task given that the two arms are incidentally controlled by the same political party, the APC.”