A video of the moment Mali’s interim President was attacked by a knifeman while he was praying at the mosque has emerged. 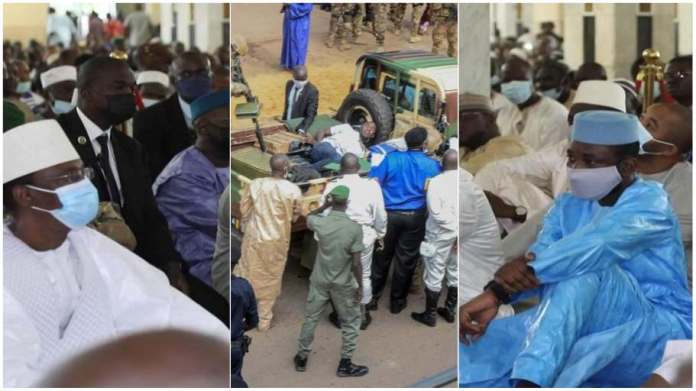 An AFP journalist who witnessed the attack said the assailants lunged at Goïta, who was quickly whisked away by security.

The journalist also said he saw blood at the scene, though it was not clear who had been wounded.

An official in the president’s office later said Goïta was “safe and sound”, after what was labelled an assassination attempt.

Goïta arrived at the military camp of Kati, outside the capital, “where security has been reinforced”, the official added.

The incident occurred after prayers for the Islamic festival of Eid al-Adha in the great mosque of Bamako.

Assailants went for the president as an imam was directing worshippers outside the mosque for a ritual animal sacrifice.

Religious Affairs Minister Mamadou Kone, who was at the mosque, told AFP that a man had “tried to kill the president with a knife” but was apprehended.

The mosque’s director, Latus Toure, said an attacker had lunged at the president but wounded someone else.

Later, a security official who requested anonymity said that two people had been arrested and were now in detention.

Security had subdued one attacker, and “investigations are ongoing”, the presidency added in a statement.

FOOTAGE HAS EMERGED OF THE AFTERMATH OF WHAT AUTHORITIES CALLED AN “ATTEMPTED STABBING ATTACK” ON MALI’S INTERIM PRESIDENT COLONEL ASSIMI GOITA. @D_J_DOYLE HAS MORE. PIC.TWITTER.COM/UUQHFGYQVE

Justice Must Prevail: Why Sheikh Gumi Should Be Treated Worse Than  Nnamdi Kanu And Sunday Igboho By Osigwe Omo-Ikirodah