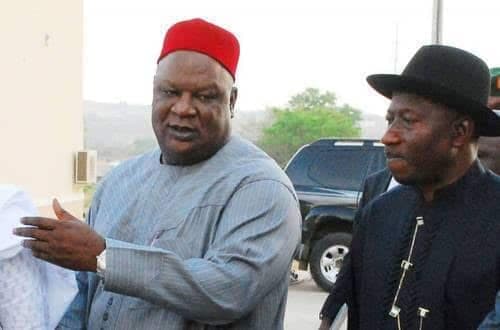 Former Secretary to the Government of the Federation and Peoples Democratic Party (PDP) presidential aspirant, Anyim Pius Anyim, has said he wants to continue where ex-President Goodluck Jonathan stopped.

Addressing former members of the National Working Committee (NWC) of the party, Anyim said he wants to continue the 2015 journey “because we had a systematic plan to refocus the economy. Put the country on the part of peace and prosperity.”

He described himself as a crisis manager who has what it takes to tackle the prevailing situation in the country.

Anyim said if Nigerians were worried about the present situation in the country and are telling the present administration to return them to 2015, “then you have no reason not to support me. At the senate I inherited a troubled senate, but I stabilized the senate.”

“If you remember then our economy was rebased, Nigeria economy became the largest in Africa. Today where are we. There were policies we put in place to encourage foreign investors, but these are things we don’t do overnight, you have to be systematic. If you support me we can return this country to the path of peace, progress and prosperity.

“The mistake that we must not make is the mistake that was made in 2015. In 2015, some of us in PDP simply decided to pull out of party and we were plunged into darkness that is why we are here today. We have to rescue this country.”

The former senate president said the country needs a stabiliser, a crisis manager and these are things that he is known for.