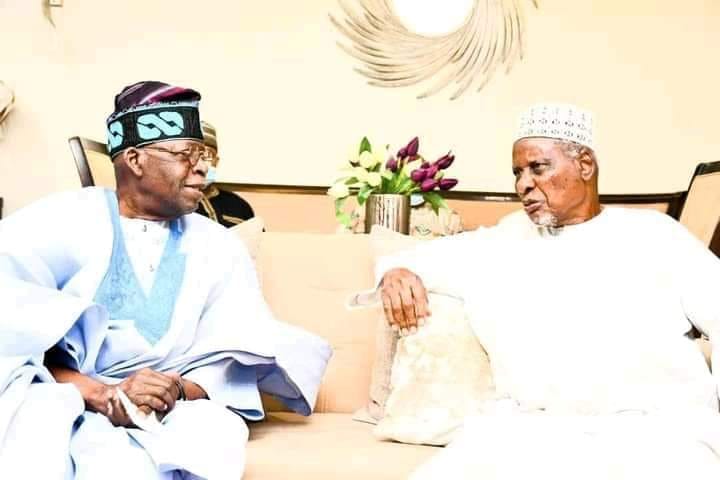 2023: Yakasai Reveals Why Tinubu Visited Him

A founding member of the Arewa Consultative Forum and elder statesman, Alhaji Tanko Yakasai, has revealed that he would support the National Leader of the All Progressives Congress, Asiwaju Bola Tinubu’s presidential bid in 2023.

Tinubu had on Wednesday visited the elder statesman at his Abuja residence.

Yakasai told Saturday PUNCH that the ex-governor of Lagos was at his Abuja residence to solicit his support for his (Tinubu’s) presidential ambition in the next general elections.

Of recent, posters and billboards advertising the rumoured presidential bid of Tinubu, who was Lagos governor from May 1999 to May 2007, have been seen in major cities, including Lagos and Abuja.

Though Tinubu has yet to declare his intention to contest any office in 2023, there have been reports and veiled indications that he might be interested in the exalted seat.

Tinubu, who celebrated his 69th birthday in March 2021 and commands an arguably large following of political loyalists, has been reported to nurse presidential ambition in 2023, even as political debates get intense for a southern president after the eight-year regime of the incumbent, Major General Muhammadu Buhari (retd.), who is from Katsina State, North-West Nigeria.

Between July and October 2021, while Tinubu was in the United Kingdom for a knee surgery and physiotherapy, over 50 politicians, including the President, six governors, dozens of senators and House of Representatives members, visited him at his London home and turned the place to a Mecca of sort.

In October, the Northern Caucus of House of Representatives, led by Deputy Speaker, Ahmed Idris Wase, had also paid a get-well visit to the APC leader in London and declared support for Tinubu’s reported 2023 presidential ambition.

Speaking with Saturday PUNCH on Friday, 96-year-old Yakasai said he had earmarked two politicians to support for Presidency in 2023.

He, however, said he has no intention to join politics but he has the constitutional right to back any candidate of his choice.

On the APC leader’s visit, the elder statesman said, “He (Tinubu) just came to visit me but actually I have two of them (presidential aspirants) that I have earmarked right from the beginning and I made a vow that any one of them who came to ask for my support first is the person I would support. Tinubu is the first person.”

When asked whether Tinubu told him he would be contesting for President in 2021, Yakasai said, “He (Tinubu) did and he asked for my support.”

Yakasai, however, said he didn’t disclose to Tinubu, during the visit, that he would support his ambition.

He also said that interested aspirants must first scale the hurdles of primary elections in their various political parties “then we will begin to compare them.”