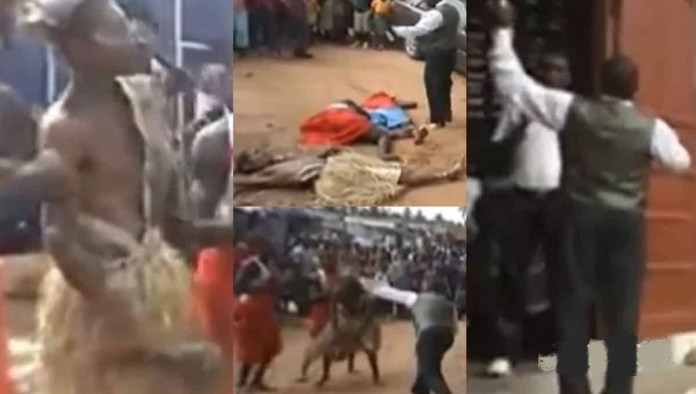 We live in a world where strange occurrences never seem to stop happening and onlookers were served with scenes befitting that of Kumawood movies depicting how pastors and fetish priests fight on camera.

The incident reportedly occurred in a suburb of Accra, Dansoman Agege, adjacent the Central Mosque. The incident went down on May 9, 2012 and the video surprisingly resurfaced on social media a while ago and we thought it wise to share it with you.

Read Also Update: Mother Of Woman Who Left Her Husband To Marry Their Pastor Speaks (Video)

The pastor identified as Apostle John Yao Tsetse was able to heal the woman after the concoctions she took from the Fetish Priest yielded no results. The fetish priest is said to have come from Benin to exact his punishment on the woman and claim the remainder of the money he was due but the pastor of the church intervened.

There was a visible clash of powers as the fetish priests and his attendees tried chanting some powers to harm the pastor. Apostle John Yao Tsetse held an anointing oil in his hand and he sprinkled the content of the oil at the priest which caused him to collapse.