Autumn Spike, the alleged former girlfriend of Africa’s richest man, Aliko Dangote, has taken to the social media to jubilate after a U.S. court dismissed the lawsuit filed against her. 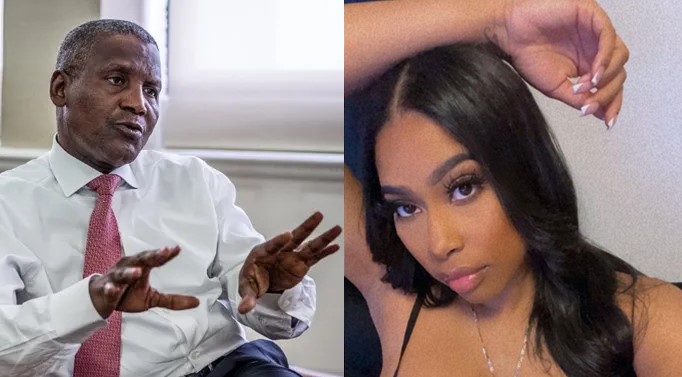 Aliko Dangote under the pseudonym John Doe filed a civil suit against Ms Spike in January, seeking “excess of $30,000” in damages against her after she shared a controversial video of herself together with him on her Instagram page on January 1st, 2021.

The video which quickly went viral on social media after Spike first posted it on her Instagram account showed the billionaire lying on a couch with Ms Spike sitting next to him.

Following the video release, Dangote accused Spike of libel, defamation and a breach of agreement “to keep their relationship private and away from the social media.” Also, Dangote accused her of attempting to extort him through her demand for $5 million in palimony

The court has now dismissed the case following the plaintiff, Aliko Dangote’s voluntary withdrawal. While Dangote’s counsel stated in the “Notice of Dismissal” that Spike’s conduct which was the object of complaint has ceased, she insisted she was vindicated because Dangote’s legal team had no evidence to back claims against her.

Autumn Spike took to her Instagram page to react as she stated that she is finally vindicated.