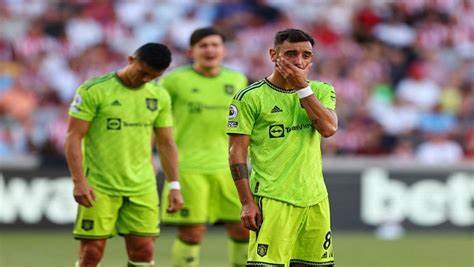 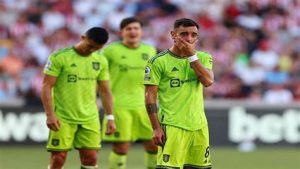 David De Gea let slip another soft shot as Manchester United fell to a humiliating 4-0 loss at Brentford, making it their second consecutive defeat in as many games.

It was also the first time since 1992 – the Premier League era, that United will lose in their first two league games.

The result was all but certain as early as the 35th minute when Bryan Mbeumo finished off a brilliant counter attack to send his team four goals up.

Erik ten Haag looked frustrated after Mbeumo converted, an expression that captures perfectly the state of the club and its fans. As it stands, all things look dim for United, except the jersey they wore in the drubbing.

Following De Gea’s error was a failed attempt to play from the back. The Spaniard’s pass to Christian Eriksen was intercepted by Mathias Jensen, followed by a melee in United’s defence and an easy slot in, in the 18th minute to double the home side’s advantage.

Not done yet, Brentford piled the pressure on United and were rewarded with a third, twelve minutes later.