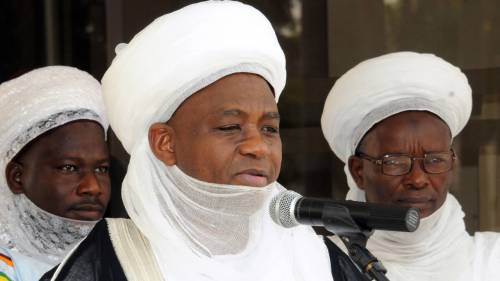 The Sultan of Sokoto, Alhaji Muhammad Sa’ad Abubakar III has stated that the military regimes relegated the roles of traditional rulers to the background and the current 1999 constitution gave no constitutional roles to monarchs as regards helping to tackle insecurity.

The monarch, who spoke at a meeting with the Steering Committee of the Senate Constitution Review Committee on Thursday, March 11, said Johnson Aguiyi-Ironsi’s 1966 Unitary Government Decree, Yakubu Gowon’s 1967 and Olusegun Obasanjo’s 1976 Local Government Reforms Decrees stripped the traditional rulers of their powers and gave same to the local government councils.

According to him, these decrees relegated the traditional institution to the background with no constitutional role.

The Sultan of Sokoto, who was represented at the event by the Etsu Nupe, Alhaji Yahaya Abubakar, averred that before the 1976 local government reforms, Nigeria was progressive, peaceful, decent and full of beautiful traditions and cultures.

The monarch appealed to the National Assembly to restore their constitutional powers.

He also alleged that the colonialists needed the traditional rulers to consolidate their indirect rule; the politicians to stabilise their governments and the military, to gain acceptance.

The Sultan said, “All the respective levels of governments needed them to maintain peace and security as traditional rulers were always at hand to douse conflict that the police, the military and the government officials could not contain.

“Currently, traditional rulers do not have the constitutional or other legal backings to perform effectively as they’re not even mentioned in the 1999 constitution. This is a great departure from all earlier constitutions that recognised them, and even gave them some functions to perform.

“Indeed, all the earlier constitutions in Nigeria gave the chairmen of the State Councils of Chiefs seats in the National Council of State alongside former Presidents and Chief Justices.”

He added that the constitution should be amended to give the traditional institution a unique constitutional recognition, noting that no community or nation would thrive successfully without due consideration of its historical evolution, customs, values and beliefs.

The Sultan said, “The constitutional provision should provide for states to enact state laws that cater for specific peculiar matters relating to traditional rulers in the respective states. In addition, the chairmen of the State Councils of Chiefs should be recognised by the constitution as members of the Council of State as it has been in all the Nigerian constitutions, except the 1999 one.”