The President, Traders Welfare, Edo State, Comrade Lucky Orukpe, has called on Edo State Government, to, as a matter of urgency prevails on the State Revenue Collectors over their multiple taxations on goat meat sellers in the state. 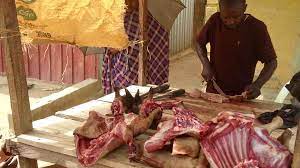 Comrade Orukpe, who led the protesters through some roads in Benin City, the state capital made a stopover at the headquarters of Edo Internal Revenue Board along New Lagos Road to register their displeasure over the multiple taxations by the Edo State Revenue Collectors.

“Today, the while thing has changed, it keeps going higher every day. We are calling on Edo State Government to come to our rescue as the multiple taxations causing untold hardship to businesses.

Addressing the protesters, a representative of the chairman of the Board, Mr Felix Isuku, appreciated the way the traders organised themselves while going on their peaceful protest.

“This really tells that you people are well organised and educated. We welcome the suggestion you people raised by way of introducing POS in the revenue collection in your market. Be rest assured that my chairman will definitely channel your grievances to the state government.”

He appealed to the protesters to select 4-man representatives who will be meeting with the Secretary to State Government (SSG) to air their views and possibly discuss the way forward.