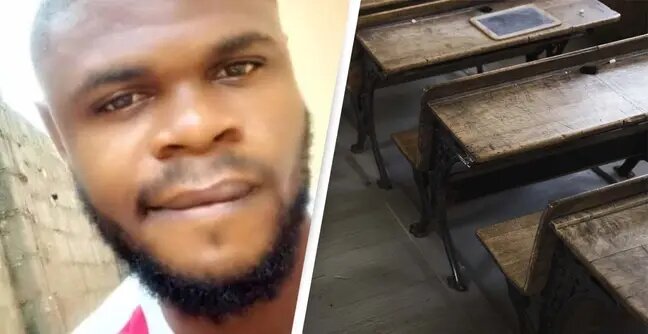 A Nigerian medical student had an extreme shock when he saw his friend’s body in an anatomy class he was taking at medical school.

Enya Egbe was in his anatomy class at the University of Calabar in Nigeria on a Thursday afternoon when he saw his friend.

Upon seeing his friend’s body on the table, alongside two others ready to be dissected, Egbe screamed and ran out of the class.

The body lying on the table belonged to his friend called Divine, who he had been friends with for over seven years. Egbe told the BBC, ‘We used to go clubbing together.

Seven years later, and Egbe can still recall the incident in vivid detail. He explained: ‘There were two bullet holes on the right side of his chest.’
Egbe was not the only student to be horrified by the incident. Oyifo Ana, who ran out to comfort Egbe, told the BBC: ‘Most of the cadavers (bodies) we used in school had bullets in them. I felt so bad when I realised that some of the people may not be real criminals.’

Ana went on to say how one morning she had ever seen a police van dropping off bloodied bodies at their medical school, which had a mortuary attached to it.

After seeing the body, Egbe messaged Divine’s family. The family had been trying to track Divine down by visiting different police stations after he was arrested with three friends after a night out. Thankfully, Divine’s family were able to finally reclaim his body.

However, the incident served to reveal not only the lack of corpses available for Nigerian medical students to use in their studies but also the reality of the fate of some victims of police violence.

According to 2011 research in the medical journal Clinical Anatomy, more than 90% of the bodies used in Nigerian medical schools are ‘criminals killed by shooting’. This means the bodies have been suspects shot dead by security forces. Their estimated ages are between 20 to 40 years, 95% being male and three out of four being from a lower socio-economic class background.

Emeka Anyanwu, a co-author of the study, noted Nigeria’s lack of development in relation to the use of bodies in medical schools. She said: ‘Nothing has changed 10 years later.’

In response to the #EndSars protests, the Nigerian government set up judicial panels of inquiry to investigate allegations of police brutality in different states.
The protest formed after a video of another young man allegedly getting shot dead by the police’s Special Anti-Robbery Squad (Sars) in the southern state of Delta went viral. Testifiers who stood before the panel spoke out about missing relatives who had been arrested by security agents who were then never to be seen again.

Police have maintained that most of the missing people were armed robbers and were killed due to an exchange of gunfire. Police spokesperson Frank Mba told the BBC that he did not know about any police dumping bodies in anatomy labs or mortuaries.

However, Cheta Nnamani, a 36-year-old trader, admitted to helping security guards dispose of bodies of people he claimed had been tortured or executed. Nnamani made these claims in a written testimony during his four months in the custody of Sars in 2009.

He wrote that he had to put three bodies into a van on one night, a task known as ‘ambulance duty’. He claimed the police then chained him inside the van with the bodies, taking him to the University of Nigeria Teaching Hospital (UNTH) to offload them before they were taken away by a mortuary attendant.

Nnamani told the BBC that he was later threatened with the same fate.

Aladinma Hospital Mortuary, in the south-eastern town of Owerri, has stopped accepting bodies of alleged criminals due to a lack of identification from the police or relatives having not been notified.

The administrator of the mortuary, Ugonna Amamasi said: Sometimes, the police try to strong-arm us into accepting bodies but we insist that they take them to a government hospital. Private mortuaries are not authorised to donate bodies to medical schools but government mortuaries can.

If bodies are not claimed over a certain period of time, they are then sent to teaching hospitals, noted senior lawyer, Fred Onuobia. But in extrajudicial killings, relatives do not get to know about the deaths and subsequently, the body of a loved one is unable to be located. Despite Egbe’s traumatic experience, it was lucky he saw Divine so that Divine’s family were able to reclaim his body.

Egbe graduated a year after his classmates and now works in a hospital lab in Delta state. Some of the officers involved in Divine’s killing were also sacked due to Divine’s family’s efforts.
Kindly Share This
Dear Reader, Fetching good and credible news information is tedious and requires huge finance. We are soliciting support from our readers and fans. For as low as N1,000  you can be a part of our golden membership. Your support would go a long way in assisting us to continue guaranteeing quality news to our readers across the globe. Bank transfers can be made to: Zenith Bank 1014932118 Ireporteronline communications Inquiries: Email: [email protected] Whatsapp: +234 7032341798 FOR BUSSINESS ADVERT CLICK THE WHATSAPP IMAGE BELOW