A car wash guy landed in a big trouble after he took a client’s Mercedes Benz to go buy food and damaged it badly. 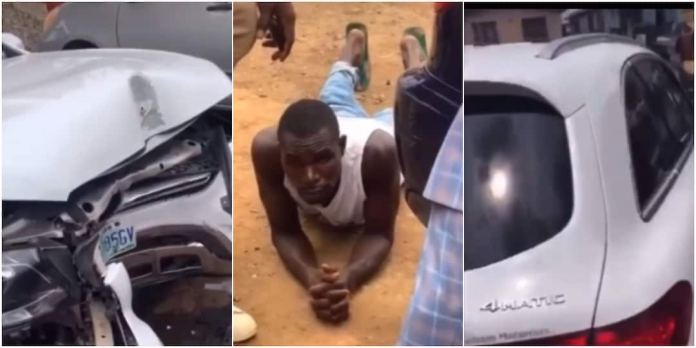 In a video shared online, the car wash guy could be seen begging the owner of the ‘German machine’ to forgive him.

The flashy guzzler was badly damaged on the front part after the reckless young man who wanted to floss to his peers crashed it on a pole.

The owner of the expensive Benz left the car keys with the car wash guy to run some errands and instructed him to park it after cleaning.

However, he decided to betray the client’s trust by driving the car to the market where he crashed it on his way.

Taking to Instagram to share the video, Tunde Ednut wrote, “Why drive someone’s car that’s in your care? The car wash guy took a client’s car to go buy Eba, Ewedu, 2 Kpomo and 1 beef. Look at what he did to someone’s car now.”

See Lovely Photos Of Footballer, Odion Ighalo With His Kids On Vacation