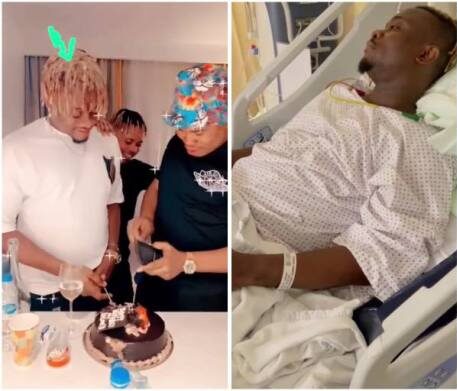 A young man has tragically died after allegedly being poisoned by his best friends during his birthday celebration.

Though the reason for their action is not clear, they reportedly poisoned his drink at the event.

According to reports, the young man believed to be a Nigerian was hospitalised not long after the celebration had ended.

A video fast circulating on social media captured the moment his friends came to his house to share in the joy of his new milestone.

In the video, the young man was seen all excited and bubbly with two friends by his side as they caught the birthday cake.

One of the friends who stood on his left is seen taking money from his wallet and pushing it into the celebrant’s pocket.

The three friends in the video were all elated as they kept jumping and making merry on the day.

Part of the video also saw him on the hospital bed as he struggles with breath.

He passed while still on admission after which the doctor’s diagnosis proved he was poisoned.