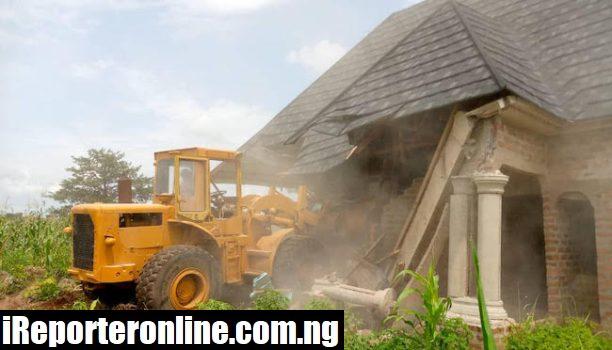 The Benue State government on Monday demolished two houses belonging to a suspected kidnap kingpin, Aondofa Cephas Chekele aka Azonto, in the state.

The house which was located at North Bank in Makurdi, the state capital, was demolished in compliance with the Benue State anti-kidnapping law.

Azonto is the second-in-command to the slain Benue top militia, Terwase Akwaza aka Gana, who was killed by the military on September 8, 2020.

The duo was reportedly caught with millions of naira supposedly meant for buying of arms and properties for Azonto.

They later led the commander of Operation Zenda JTF, CSP Justine Gberindyer, and other police officers to the two houses that were demolished on Monday.

They told security agents that the houses were used as hideouts by the criminals.

The first house, which is located near the Federal Housing Estate, Phase 1 Nort Bank, is a four-bedroom apartment while the second is a two-bedroom flat.

Gberindyer, who spoke to journalists after the demolition exercise, said the Benue State government would rid the state of kidnappers and other criminals terrorizing the citizens.

Read More DISCLAIMER! See The Notice From Side Chick Association Denying Chidinma That Gets The World Talking