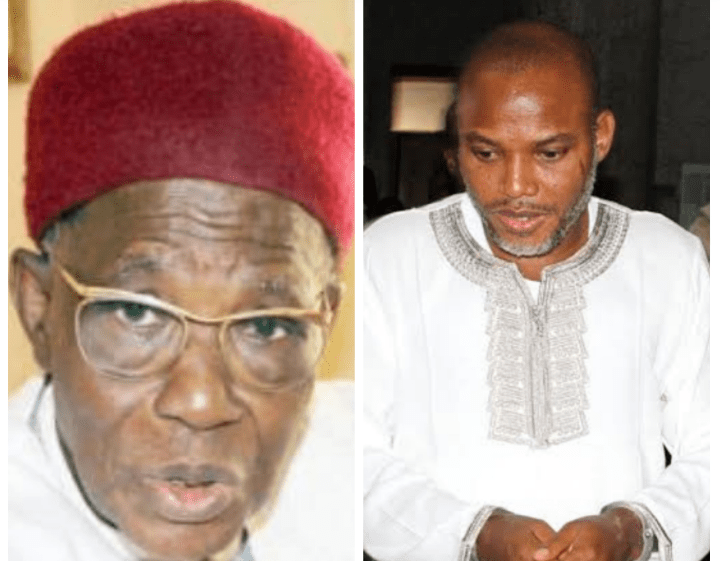 Muhammadu Buhari was in power in 1984 as a military Head of State when an attempt was made to crate fugitive Umaru Dikko from the UK to Nigeria. It failed. Then, in 2021, the same Buhari is in power, now as a civilian President, when Nnamdi Kanu, Leader of the Indigenous People of Biafra (IPOB) was abducted from Kenya and brought to Nigeria. Read the difference between the two epochs in this story

Charles David Morrow, a young British customs officer, has the telescopic eyes of an eagle, olfactory lobe of a dog and the instinct of an alley cat. With these endowments, he could sniff trouble or crime or mischief from any crevice, even if it is hidden in medieval catacombs. What happened that day in 1984 was actually like smoking out crime from an underground chamber. Morrow displayed these at the cargo terminal of Stansted Airport, 40 miles (64km) north of London when Umaru Dikko, Nigeria’s Transport Minister, was crated, ready to be flown to Nigeria to face corruption charges.

The characters who abducted Dikko were Alexander Barak, an Israeli alleged former Mossad agent. He was the leader of the gang. There was also a Nigerian intelligence officer, Maj Mohammed Yusufu. Two other Jews were also involved: Felix Abitbol and Dr Lev-Arie Shapiro, who, as BBC put it, “was to inject Mr Dikko with an anaesthetic.”

The kidnappers, as the report further had it, switched vehicles in a car park by London Zoo and headed towards Stansted airport “where a Nigerian Airways plane was waiting. They injected Mr Dikko and laid him, unconscious, in a crate. The Israeli anaesthetist climbed into the crate as well, carrying medical equipment to make sure Mr Dikko didn’t die en route. Barak and Abitbol got into a second crate. Both boxes were then sealed.” It was ready to be flown to Nigeria. But something threw spanner in the works!

Around 3pm, the handling agents informed Morrow that a cargo was due to be loaded into a Nigerian Airways 707. The owners, led by one Edet, an Ibibio man from present Akwa Ibom State of Nigeria, did not want it examined because it “was a diplomatic cargo…just documents and things.” Though Edet showed Morrow his passport, he (the latter) decided to find out more, not relying on what he might have read in History books about what the Geneva Convention stipulated on such matters.

At this point, in a strange coincidence, another airport official, according to the BBC report, came from the passenger terminal with some news, “an All Ports Bulletin from Scotland Yard saying that a Nigerian had been kidnapped and it was suspected he would be smuggled out of the country.”

It was an alarm raised by Dikko’s secretary, who witnessed the rough handling of her boss that triggered the chain reactions by security agents. As BBC put it, hearing the news, Mr Morrow realised he had a problem on his hands. “I just put two and two together. The classic customs approach is not to look for the goods, you look for the space” he said.

“So I am looking out of the window and I can see the space which is these two crates, clearly big enough to get a man inside. We’ve got a Nigerian Airways 707, which we don’t normally see. They don’t want the crates manifested, so there would be no record of them having gone through. And there was very little other cargo going on board the aircraft.

“If you want to hide a tree, you hide it in the forest. You don’t stick it out in the middle of Essex.”

“To qualify as a ‘diplomatic bag’ they clearly had to be marked with the words ‘Diplomatic Bag’ and they had to be accompanied by an accredited courier with the appropriate documentation. It was fair to say they had a Nigerian diplomat – I’d seen his passport – but they didn’t have the right paperwork and they weren’t marked ‘Diplomatic Bag’,” he said.

It was when a decision was taken that the crates could be opened in the presence of a Nigerian diplomat, that trouble started.  As BBC quoted Morrow: “Peter, the cargo manager, hit the lid on the bottom and lifted it. And as he lifted it, the Nigerian diplomat, who was standing next to me, took off like a startled rabbit across the tarmac.”

“You have to remember we are on an airfield which is square miles of nothing. He ran about five yards (4.5m), realised no-one was chasing him and then stopped.

“Peter looked into the crate and said: ‘There’s bodies inside!’ Morrow and others dialed 999 and the cat was let out of the bag. Pandemonium!

Just like the failed abduction of Dikko created a diplomatic row between Britain and Nigeria, the Kanu’s case has also created its own fireworks. Britain has been swearing by the tombs of its kings and queens that it had no hand in the drama at all.

Nigeria’s security officials did not help matters either. They sold a dummy to the Nigerian media about where Kanu was abducted. While some dailies in Nigeria (quoting security sources) reported it was in Brazil, others wrote Ethiopia.

However, Kanu’s lawyer, Ifeanyi Ejiofor, as TheNEWS reported earluer, revealed the IPOB leader was “neither arrested in Brazil nor Ethiopia, as was widely speculated but at the Kenya International Airport Nairobi by the Kenya’s Special Police Force on 18 June.”

He  wrote on his Facebook page: “Mazi Nnamdi Kanu, was actually abducted by the accursed Kenya’s Special Police Force on the 18th of June 2021 at their International Airport, and consequently taken to an undisclosed residence under dehumanizing conditions.

“He was tortured and subjected to all forms of inhuman treatment which worsened his health condition. He was illegally detained for eight good DAYS in Kenya before being transfered to their Nigerian counterpart.

“He was purportedly investigated on a bogus charge while in their custody, ostensibly, awaiting to be handed over after their findings proved him innocent of all the spurious allegations. They later beckoned on their Nigerian Counterpart to take over.

“Kenyan Government was deeply involved in the abduction, detention and ill-treatment of my Client before the illegal handover to their Nigerian counterpart,” Ejiofor maintained.

Ejiofor, who had earlier raised the alarm about Kanu’s worsening health condition and the fact that he had been denied access to his client, revealed that Kanu’s heart had enlarged by 13 per cent.

“A scan of his heart showed that the heart has enlarged by 13% due to the dehumanizing treatment meted to him. There will be need for immediate proper medical examination and attention for him.

“Mazi Nnamdi Kanu conveyed his goodwill message to all IPOB family members worldwide, and craved for your unrelentless prayers.

“We are going back to the Court for the needful. Other details cannot be entertained here.

“His fortified legal team will address these infractions at the proper forum as we progress. Other details on our legal strategy, may not be made public.

“With Chukwuokike Abiama on our side, Victory is assured. For if God Almighty be for us, who can be against us?”

Igboho Was Disturbing Peace With His Campaign Against Fulani Herdsmen – Buhari