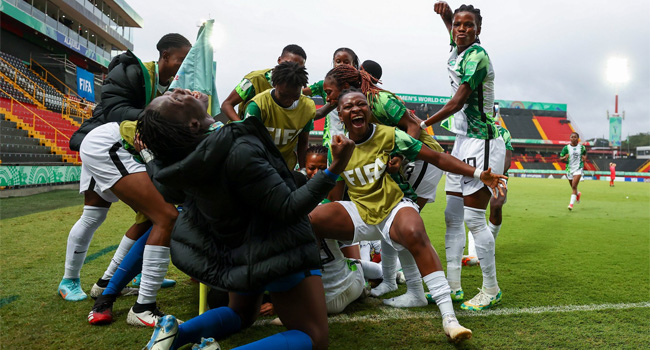 FIFA U-20 Women’s World Cup: See What Nigeria’s Falconets Did To South Korea

The Falconets pipped South Korea early Monday at the U-20 Women’s World Cup to seal a quarter-finals spot in the competition.

Esther Onyenezide scored a screamer in the 83rd minute to give Nigeria the 1-0 win, sealing her side’s spot in the last eight.

The Group C encounter, delayed by an hour due to poor weather conditions, was heading to a barren draw until Onyenezide, who has been impeccable in the midfield for Nigeria, collected the ball nicely and drove a powerful shot past the Korean keeper Kim Kyeong-Hee in what would be a goal-of-the-tournament contender.

Super proud of the entire team! We did this together💪.

We can’t stop thanking everyone that has been there for us. Thank you guys! We won’t let you 👇 down.

Coach Chris Danjuma’s side earlier had a chance to take the lead in the first few minutes of the game but Basirat Amoo’s freekick did not trouble the Korean goalie.

Although the Asians would have also scored, efforts from  Lee Soo-In and Garam Chun failed to beat the Nigerian goalkeeper Oyono Omini.

When the second half began, both sides made frantic efforts to score. Once more, the Nigerian goalkeeper Oyono was in fine form and made some spectacular saves to keep her side in the match. One such save was around the 64th minute when she nicely parried away a shot destined for the top right corner.

Read Also Tiwa Savage Has Done It Again, Appears Almost Unclad Despite Having A Dress On (VIDEO)

But with about seven minutes left to play Onyenezide conjured a screamer that eventually sent the 2014 runners-up to the last eight of the competition in Costa Rica.

Having won their first two games (they defeated France last week by a lone goal), Nigeria’s next match against Canada will afford Coach Danjuma the chance to rest some key players and also give others an opportunity to taste the action.

The Nigerian ladies are expected to take on a team from Group D which comprises the United States, The Netherlands, and fellow Africans, Ghana.

Since the inception of the competition, the Falconets have participated in all editions, finishing runners-up in 2010 and 2014.